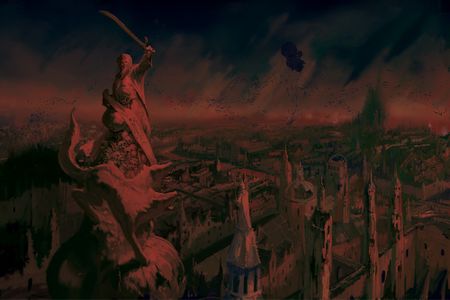 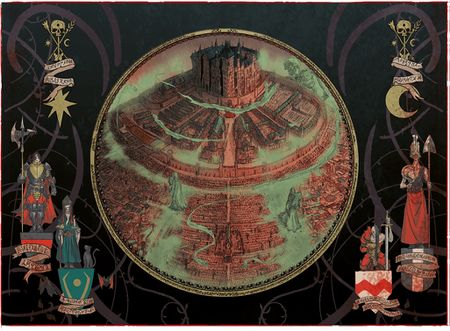 Ulfenkarn or Wolf’s Feast [4] is a ancient city in the Realm of Shyish.[1]

The city was initially founded as Mournhold when the Ebon Citadel was constructed on the windswept island of Szargorond by Houses ven Alten, Vossheim, and Gaunt, three noble families from the Realm of Azyr.[4] For many generations both the living and the spirits of the dead lived peacefully together breeding a tough people whose strength would be sorely tested during the apocalyptic Age of Chaos.[1]

When the Dark Gods invaded the Mortal Realms, pouring their legions into reality, Ulfenkarn, like so many other cities, found itself isolated and besieged. Eventually, it was laid to waste by Slaughn the Ravenor, a Daemon Prince of Khorne.[4] In the aftermath, the survivors agreed to a pact with a potential saviour, one that the city and its people would regret forever.[1]

Radukar the Wolf and his fleet saved the city but after claiming the Ebon Throne he began to surround himself with his coterie of fiends and lackeys, the Thirsting Court. However, relative peace still reigned well into the Age of Sigmar until the Necroquake swept across the realms and, Radukar was infused with great power, losing all remaining restraint. He and his courtiers went on a bloody rampage against any who might defy them, turning a fortunate few into vampires but most were merely slain and their corpses left all across the city.[1]

Since that day the living have laboured endlessly for their cruel masters.[4]

Under the rule of Radukar and his Thirsting Court the once vibrant whaling city has fell into much ruin and disruption. Many industries, such as book binding have almost completely ceased to operate; whilst others such as saltboiling and whaling continue. [9c] [9d] Every citizen is liable for a daily blood tithe, donated in great fountains designed to repel vermin. The destitute may sell their blood in blood farms in exchange for a bed or food with their blood sold to the wealthy to replace their blood tithes; it should be noted however that the blood farm donators are still liable for their own tithes. [9b] [9e] All crimes are typically punished with one sentence; public exsanguination, their body left for draining by whoever (or whatever) wills. [9a] [9b][9c]

A strict curfew is enforced partly by the Volkshafen and the Ulfenwatch; but given the increased risk of predators at night few would risk it even were it not forbidden. This risk is greatly increased the closer one gets to the Ebon Citadel, which is also surrounded by a life-stealing misama, or in the vast swathes of the city which lay in ruins. [9b]

An almost instinctual respect for nobility has persisted through the changes Ulfenkarn has faced, with many who found loyalty to the old noble houses now finding themselves accepting the new order. [9f]