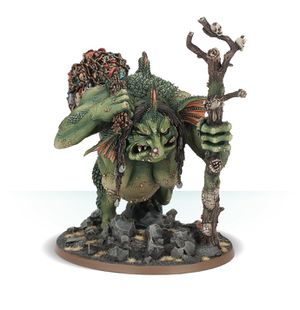 Troggoth Hags are female Fellwater Troggoths with a modicum of intelligence and arcane powers, allowing them to serve as both leaders and envoys of their tribes. They can communicate in ways that allow even the most dim-witted of their kin to understand. Troggoths natural ability to regenerate is further augmented in these females by the arcane energies that run through their bodies. Their stench of dank swamp makes even the hardiest warrior retch uncontrollably when close to them.[1]

As a wizard she is natural capable of casting the Arcane Bolt and Mystic Shield spells, as well as the Hag Curse, cackling curses so insidious and vile that they rob foes of their strength and shackling them with ill fortune. With her she carries a sackfuls of strange fetishes and weird keepsakes, using the most of them to cast hexes upon other that cast against her, giving her the ability to wound these casters after unbinding the spell cast on her. If magic fails they can use the deadwood staff they are armed with, are able to copiously vomit on their foes to cause damage and can always crush foes under their bulk.[1]