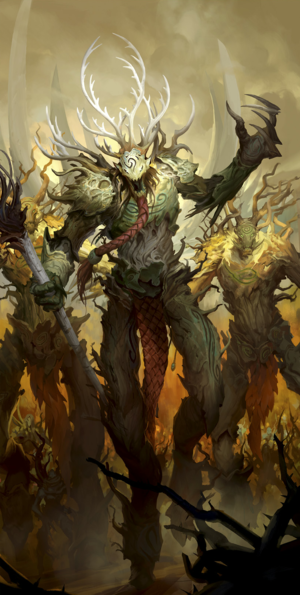 Noble Spirits head to war, led by a Treelord Ancient.

The most prominent of these spirits are the Treelords and Treelord Ancients who serve the tree folk not only as leaders and nobility but also as Loremasters, Captains of the Household and Warhosts. The Ancients are the rulers of the many enclaves of the sylvaneth that survived the Age of Chaos as well as mystics and defenders of the forests.[1][5]

Both Ancients and Treelords resonate with life magic and are able to not only perceive but also project the Spirit Song of Alarielle across huge distances - hundreds of miles or more, although they cannot project it between realms, only their goddess can do that. Many of these powerful entities can also use the realmroots to move between Wyldwoods, traveling many leagues in the blink of an eye.[1][3a]

As they move, the earth shakes with their strides and their roots burrow through the ground to strangle their enemies. Their massive talons can impale or sweep away its enemies and their ground-shaking stomps can knock them of their feet.[5]

Ethereal spites can often be found dwelling in or around Treelords.[5][6]

Treelord Ancients are gargantuan, towering tree-spirits and some of the oldest living creatures in the Mortal Realms. Compared to those that dwelt in the World-that-Was they have replaced their strangleroots with a doom tendril staff. Ancients are powerful wizards capable of using the Lore of the Deepwood as well casting other spells such as Arcane Bolt, Mystic Shield and their own Awakening The Wood which is used to awaken the Wyldwoods to assault its enemies with their branches and thorns.[2][3b]