From Age of Sigmar - Lexicanum
(Redirected from Tidecaster)
Jump to: navigation, search 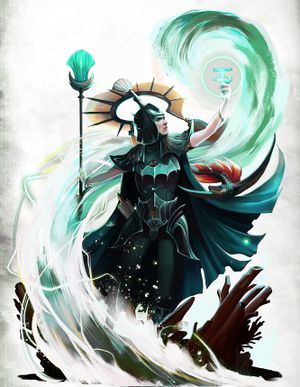 Isharann Tidecasters are one of the most vital fanes, branches, of the Isharann, the mage caste of the Idoneth Deepkin. It is their magic and arcane skill that allows the creation of the Ethersea, the phantasmal mixing of sea and air that is needed for the Idoneth to live and survive in their Enclaves built in the oceans of the Mortal Realms.[1a][2a][3a][4]

Like any other race of Aelves the Idoneth require air to breath and their aquatic bond-beasts can not survive without water, so the Ethersea created by the Isharann Tidecasters, a mix of both air and water, is vital to the day-to-day survival of the Idoneth and their societies. Travel and trade, though admittedly rare, would be impossible without the Tidecasters and so too would their raids upon the surface, for it is only through the spells of these mages that Idoneth Creatures can move above the surface across the vast distances that separate their oceanic homes from all else. This power comes from the ocean, bitterness and the spite that drives them and their spells are conjured from the repressed anguish of the Idoneth, a curse they inherited from their ancestors, gained from being tortured within Slaanesh.[1a][2b][4]

Skilled Tidecasters are the most powerful of the battle wizards of the Idoneth and can externalise this loathing to attack the minds of mortals. This magic comes from the crushing depths and the endless abyss of ultimate repression that is used on their foes to wash away their memories or expose their deepest terrors, shattering their psyches and leaving them vulnerable to attacks by the other castes. These spells take many form, like crushing waves of despair and fear, raging maelstroms of horror and black pits of hopelessness, and some victimized by it feel that they are trapped underwater, drowning in their fears and sorrows. This last effect is used in their Riptide spell.[1a][2b][3a][4]

Every Idoneth Phalanx is comprised of three main components. A main body comprised of troops, divided into Akhelian and Namarti battalions, an Isharann Soul Warden who co-ordinates war efforts from the safety of the Enclave, and a triumvirate command group. These three leaders are an Akhelian King, an Isharann Soulscryer, and of course an Isharann Tidecaster, whose presence is needed if the phalanx is to get from the enclave to the surface and back.[1a][2c]

They use canals and rivers to strike deep into the continental territory.[1a]

The Tidecasters creation of the Ethersea is what allows rare and trusted representatives of the nations above the surface to visit the Idoneth nations.[1a]

Able to manipulate the ethersea to such an extent, Tidecasters often serve as emissaries to the surface world with a few becoming Soulbound and such are their abilities that they are able to demand much from whichever deity seeks their service.[1a]

Isharann Tidecasters are protected from harm by Spirit Guardians, ethereal manifestations of the underwater creatures that populate the Idoneth territories.[3a][4]

A Tidecaster will wield a staff known as a Pelagic Staff and an aelven rune for water in her other hand. She is clad in metal armour with spiked shoulder pads and a helmet with a finned crest and a shell at its center. Behind her there is large cloak and from her hip hangs a scroll cases and a set of potion bottles that denotes her wizardly status.[2d][3a][4]