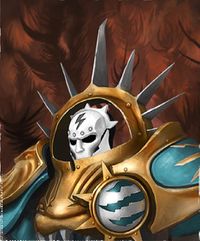 He has blonde hair, blue eyes, and is bearded. He has a square jaw and heavy features.[2] [4a]

Before he was reforged he was Prince Caeran of Amcarsh. Returning home through the pass of Unnumbered Birds with head of his enemy, Sur Jactr, a Chaos champion and Reaver of the Sixteen cities he discovered the Great Glen of the Wolf had been attacked and despoiled by by Beastmen. Enraged, he and his companion, Tarm fought hard to avenge the dead of the four villages and the Wolf Keep before they were overcome. As they were about to die he called upon Sigmar and was taken by the Storm god to be reforged.[2]

He was released upon Anvrok with three Stormcast Eternal Brotherhoods to find the Silverway. Upon finding it and fighting off an attack by the Bleak Horde of the Chaos Sorcerer Ephryx, Thostos went after the sorcerer and assaulted the Eldritch Fortress in the Ruins of Elixia. Thostos attacked the fortress and taunted its defenders into opening the eastern gates.

When they came out the first wave was quickly slaughtered but the second locked themselves in lines behind enchanted shields that made Judicator bolts ineffective. Thostos quickly developed a work around by ordering his Judicators to shoot at the metallic earth near the warriors feet, as the electrical discharge followed through their metallic boots into their body. He saw the Sorcerer and made a leap to attack him, but got washed away by sudden waterfall of gold that propelled him into the courtyard and within reach of a Mutalith Vortex Beast whose tentacles transmuted him into a statue of living moving Sigmarite.

He laughed as the creature's ability was turned against itself as he was now immune to it's effects and harder than ever, slaughtering the creature and finding the wizard just ahead of him. At this moment the Tzeentchian panicked and cast a spell to turn life into death using the power stored in the fortress. Thostos saw a bright light as he died and was sent back to Azyr to be reforged. He reported this light as golden, violent and pure to Sigmar himself, which the God identified as Ghal Maraz.[1]

Yet in his reforging he lost the last memories of his former life.[2]

Battle for the Ironholds

Several months before the attack on the Mercurial Gate began, Thostos had led four Fyrds of Fyreslayers from the Greyfyrd Lodge and three Warrior Chambers through magma tunnels dug out by the slayers.[3a] [3b] The plan worked initially, the garrison of the bastion where they emerged had dispatched much of its forces to the outer defences and the forces of Order quikcly overcame them. However, sleeping in the depths of the Molten Sea was the Godbeast Argentine and now it was awoken and it arose, breathing warpfire across the isle, killing half the slayers and many Stormcast. Luckily Dracothion had been watching and with a blast of energy challenged his rival which Argentine was happy to meet. [3c] Thostos those that remained of his force across the bridge that led to the final keep thaat guarded the gate and they were met on the vast bridge by those Ironguard that had not been dispatched to the outer defences. [3d]

These guards were without direct magical support and quickly defeated, but all the warriors of Order felt insideous whispers and doubt in their minds. Then Archaon himself arrived with his Varanguard.[3d] Seeing little chance of victory, Thostos ordered the majority fo his force to retreat keeping only some Prosecutors and Liberators to form a shield wall, where they were joined by Hursgar-Grimnir who had sent the rest of his lodge back to the bastion. [3e]

As Archaon butchered his way through the Stormcast, Hursgar attempted to reach Stilskeen, but all was interupted by a celstial bolt of energy from the wounded but victorious Dracothion.[1e] Thostos and his few stormcast killed many of the Varanguard, but then Archaon confronted the final three and despite Thostos managing to land a good blow upon him, he took his head, feeding his soul and body to his mount ensuring no soul would ascend to Ayzr. [3e]