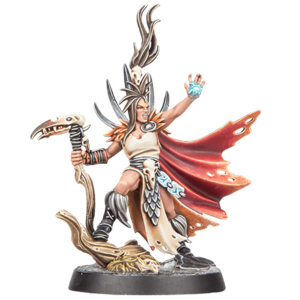 She is guided by powerful visions of forthcoming glory and conquest and has taken the Godsworn Hunt, hardened killers and champions of the Tribe of the Black Fang to the city of Shadespire. She and her followers have sworn a blood-oath to not leave the city until each member has slain a Stormcast Eternals. Theddra Skull-scryer is a powerful wizard but needs to prove her worthiness if she is lead the tribe and seeks a suitable sacrifice in the mirrored city to pledge to the Chaos pantheon.[1][2][4][5]

She is armed with a Darkoath Wand and is a wizard that knows the standard spells as well as the Enfeeblement spell.