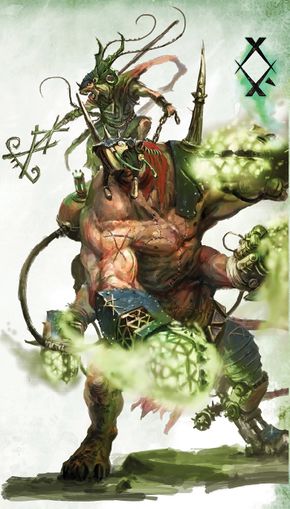 Grey Seer Thanquol is a paranoid, megalomaniacal, warpstone-addicted Skaven of half-remembered myth. With a brain full of fevered schemes for greatness, he rides out upon the shoulders of his monstrous Rat Ogor named Boneripper unleashing sorcerous fury upon those who stand in his way.[1a][1c]

Described as rabidly ambitious, and as inspired as he is delusional, the warpstone-addicted Thanquol is seen a loose cannon. Amongst other Grey Seers he is an object of envy and hatred, for his convoluted scheme bewilder his rivals at least until they come to improbable fruition or blow up in his face. So convinced is Thanquol of his own genius that he will shift blame for his failure to the first available victim, and then proceed to adapt his plan to account for and perhaps capitalise on its catastrophic failure.[1b]

While Thanquol will attribute his miraculous escapes from danger to his own cunning and good fortune, in truth it is the result of Great Horned Rat occasionally indulging Thanquol with wards of protection.[1c]

Thanquol is traditionally accompanied by a monstrous Rat Ogor called Boneripper. The first Boneripper was slain long ago, but due to feelings of sentimentality towards the brute, Thanquol will commission agents of Clans Skryre and Moulder to fashion him a new and unusually improved beast to act as his bodyguard and steed.[1b]

It is rumored that Thanquol is ancient, and that the Great Horned Rat plucked him from the World-That-Was and imprisoned him for some grandiose error, before Thanquol gnawed himself free.[1b] Indeed, Thanquol's origins lie in the World-That-Was, wherein he was and still is the arch-nemesis of the still-living Gotrek Gurnisson.[2]

Following his sudden appearance in the Blight City,[1b] Thanquol proceeded to accumulated power, which raised suspicions he desired a seat at the Council of Thirteen.[1b] During the so-called Corpse-Thing War, in which the undead massed upon the Blight City even as the Skaven launched a secondary invasion of Nagashizzar, Thanquol devised a grand plan that succeeded in containing the undead. However, upon victory, Thanquol quickly disappeared, likely due to his justified paranoia that the Council of Thirteen would have quickly wanted to crush such a successful upstart. It is also due to the number of unhappy Clawlords, which presumable wanted to 'discuss' the number catastrophic number of skaven casualties his plans entailed.[1a]

During Thanquol's travels he once again encounters his old arch-nemesis, Gotrek Gurnisson. Both sought a Realmgate leading to the World-That-Was, which was found to be hidden within the Crystal Labyrinth of Tzeentch. This Realmgate was left abandoned, even Daemons lacking interest in it, as none but those with the blood of the World-That-Was may pass it. As Gotrek discovered the Realmgate, Thanquol surprised him with an appearance. Gotrek remarked how old Thanquol had become, and how Gotrek still carries the grudge against Thanquol for the murder of Felix Jaeger's father. Thanquol attacked, initially having the upper hand after burying Gotrek beneath a spell of Vermintide. However, Thanquol was defeated and driven off after Gotrek summoned the power of the Master Rune. Upon Thanquol's defeat, Gotrek destroyed the Realmgate to the World-That-Was, so that it may never be used to threaten the Mortal Realms.[2]

As the Soul Wars raged, and the Skaven find themselves clashing over the spoils, the Grey Seer Thanquol concocts fresh plans.[1a]