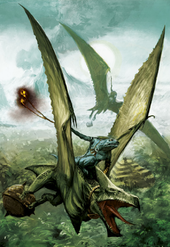 A Skink riding a Terradon.

Terradons dominate the skies above the canopies of the jungles that the Seraphon call home.[1a]

Terradons are a variety of leathery-winged reptilian creatures found in the jungles of the Mortal Realms. They are capable of great feats of stamina and speed, capable of gliding for several days straight if the thermal currents allow and diving as swift as a falling comet to catch prey. The talons on their hindlimbs allow them to pick up prey with ease.[1a]

Terradons are often seen as cold-blooded killers by non-Seraphon observers, as one of the primary methods of play they engage in is holding aloft captured prey as fellow members of their flock toy with it. In spite of this they are highly social, intelligent creatures that can form close bonds with other creatures and learn to follow directions, traits that make them ideal mounts for the Seraphon.[1a]

Seraphon Skinks who ride atop Terradon are utilized as outriders and scouts for Seraphon warhosts. In battle Terradon Riders prefer to use the speed of their mounts to launch probing strikes before falling back to safety, preferring to keep away from close combat where possible. To this end, Terradon Riders equip themselves with ranged weapons such as Moonstone Javelins, or the more exotic Sunleech bolas, slings that launch grub-like creatures known as Sunleech that explode into flames on impact.[2]

Most infamous of a Terradon Rider's armaments are the payloads hoisted by the powerful hind legs of the Terradon themselves, chunks of meteorite equipped wih handles and etched with Azyrite sigils by the venerable Skink artisans of their Seraphon masters. Terradon can carry these payloads considerable distances, needing only a signal from their rider to let them loose, the meteors exploding in blasts of heavenly light as they crash upon their foes.[2]