From Age of Sigmar - Lexicanum
(Redirected from Temple-city)
Jump to: navigation, search 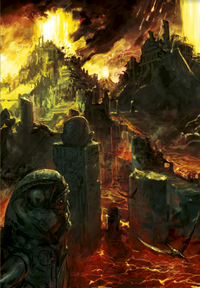 Temple-Cities are the permanent settlements of the Seraphon that have coalesced into their respective realms. These cities were created upon the landing of the temple-fleets, whereupon these cities serve as bases from which the Slann Starmasters may guard the Astromatrix.[1b]

Temple-cities are founded upon the landing of the Seraphon temple-fleets. The Seraphon who reside in these permanent Seraphon settlements will coalesce with realm upon which the temple-city is founded. Eventually becoming true creatures of the realms, they gain physical permanence, opposite in nature to their daemonic nemeses.[1b]

When the temple-fleet lands, the slann will utilize their ability to manipulate spatial laws to hide the most essential treasures and resources of the Seraphon: a majority of their great engines, spawning pools, and secret vaults that include the greatest treasures of the Old Ones. By phasing these essential resources and treasure into the ground, hollowing out subterranean caverns below the streets of the temple-city, are they kept hidden from prying eyes. The displaced subterranean earth is then hurled into the cosmos, forming burning meteors that herald the temple-city's foundation as falling stars.[1b]

Temple-cities, like Realmshaper Engines, are estbalished atop critical nodes in the Astromatrix, on the invisible ley lines only visible beneath the light of Sigendil. The Realmshaper Engines play a crucial role in establishing these strongholds as they are responsbile for creating the environment, in line with the Great Plan, in which Seraphon society thrives.[1b]

Even if thousands of miles apart, it is not uncommon for multiple temple-cities to be created from vessels of the same temple-fleet as the greatest of temple-ships can break down into smaller ships. They may even self-replicate through the strange artiface of the Old Ones and unfold like golden puzzle boxes. Although no two temple-cities are identical, they are all carefully aligned to channel the energies of the Astromatrix[1b], which sits along the hidden ley lines within and between the realms.[1a] Each stepped ziggurat within the temple-city will be connected by these ley lines of power, surrounded by obelisks, glyph-marked pylons and other devices that draw upon the raw energies of the realms and the cosmos. Akin to great superconductors, these structures within the temple-city control the flow of magic and are utilised in the powering of the arcane technology within and feeding into the star-rituals of the Seraphon.[1b]

At the heart of each temple-city sits the grant temple, that juts towards the heavens, where the Slann Starmasters contemplate the cosmos and communicate with their brethren within the Star Chambers of the highest ziggurats. Towards the outskirts of the temple-city are typically located the spawning pools of the skinks. However, the birthing-pools and barracks of the saurus are deep below they heart of the city. Throughout the temple-cities are translocation gateways, which are miniature and localised Realmgates constructed through the arcane knowledge of the slann. With these constructs, the saurus can be quickly deployed throughout the Seraphon territory upon the clarion call to war.[1b]

While not all buildings within the vast conurbations temple-cities contribute to the furtherance of the Great Plan, all contribute in some way to Seraphon society. The suburbs of the labour force are formed of large ranks of skink barrios, where they dwell and live lives of productivity and worship. Skink overseers can be found chirruping directions to lumbering Kroxigors who obediently stack celestite blocks to reinforce damaged structures. Aside from tending to the temples, skink work-gangs will plot roads and repair fortifications, cultivate foodstuffs in the temple-city's great refectory domes and ziggurats and ensure the magically potent sigils carved into each golden stele or obelisk remain so. Though the skinks may seem dispassionate to outsiders, they possess a refined sense of aesthetic. The greatest of their artisans will labour to construct towering statues of the Old Ones, create elaborate mosaics depicting cosmological conjunctions or the mythic cycles of the Seraphon.[1b]

Prior to the temple-fleet's landing, the Realmshaper Engine morphs areas of the material plane in line with the interpretation of the Great Plan. Having been charged with celestial energy, the the orbs atop ziggurats glow bright before unleashing waves of terraforming power. Thick jungles sprout from the rockiest ground and bubbling swamps form from barren dust, while creeping vines and venomous plants overtake the ruins of ancient civilisations. A side effect of the Realmshaper Engine drawing upon the Astromatrix is that the jungled formed by the engines come to reflect the essential qualities of their home realm. For example, Aqshian temple-cities are often surrounded by particularly sweltering forests, whereas those of the Shyish, the realm of death, are often withered and emaciated. Meanwhile, the type of jungles that may form within Ghur are best left unconsidered.[1b]

The sweltering environment quickly attracts a variety of reptilian life. This includes hosts of serpents slithering through undergrowth, warbeasts of the Seraphon that live and hunt amidst the dense trees. The slann permit these lifeforms to take residence partially so that they form as a natural barrier against meddlers from other races, whether they intrude intentionally or not. The buzzing tropical insects attracted to the sweltering head also provide plenty for the slann to snack on when not in deep contemplation.[1b]