From Age of Sigmar - Lexicanum
(Redirected from Tempestor)
Jump to: navigation, search

The Dracothian Guard are indomitable knights of the Extremis Chambers who ride into battle upon Dracoths. They serve as the shock cavalry of the Stormhosts, a role that suits both riders and mounts who are all eager to rush headlong into battle.[6a]

Forces of the Dracothian Guard are divided into two echelons, the Lightning Echelon and Thunderwave Echelon. Each echelon is in turn divided into two types of retinues. The retinue a Stormcast is assigned to is determined by their temperament, and will often be paired with a Dracoth of similar temperament.[6a]

The Lightning Echelon is comprised of the aggressive warriors of the Fulminator retinues and the marksmen of the Tempestor retinues.[6a] 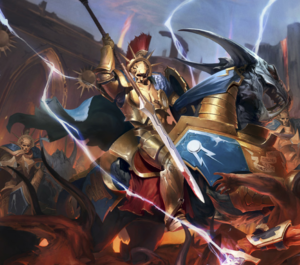 A Fulminator of the Hammers of Sigmar

Fulminators are the Dracothian Guards armed with Stormstrike Glaives and Sigmarite Shields. They are considered the tip of the spear and they clear the path for the rest to follow.[5] 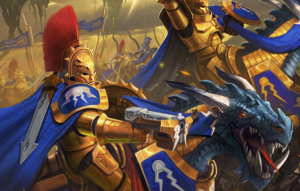 A Tempestor of the Hammers of Sigmar

Tempestors are the Dracothian Guard that charge into battle armed with Volleystorm Crossbows, ranged weapons that shoot hails of bolts that burn like blazing meteorites, a Warblade and a Sigmarite Shield. They can concentrate their fire to fell powerful foes or open enemy lines so the rest of the Dracothian Guard can exploit.[4]

The Thunderwave Echelon is comprised of the brutal brawlers of the Concussor retinues and the merciless Desolator retinues.[6a] 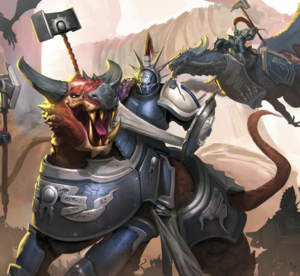 A Concussor of the Tempest Lords

Concussors are members of the Dracothian Guard that wield Lightning Hammers into battle, stunning their enemies with shocks of azure thunder.[2] 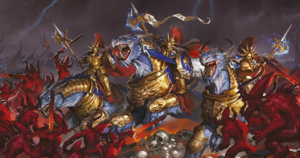 Two Desolators lead by a Lord-Celestant on Dracoth fighting Bloodletters

Desolators are members of the Dracothian Guard that are armed with Thunderaxes and Sigmarite shield, using their lighting arc to slay all those not striked down by their Dracoth's breath.[3]