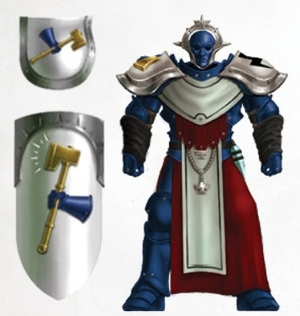 A Sequitor of the Tempest Lords. 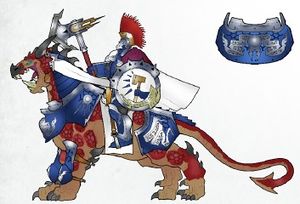 A Desolator of the Tempest Lords.

The Tempest Lords are a Stormhost of the Stormcast Eternals, known for being noble and courteous in everything they do. They are known to lead by example, using their stirring rhetoric to galvanise the downtrodden and oppressed to rise up and follow these noble demigods to victory.[3] Their worship of the godddess known as Mirmidh, She Who Rules, has taught them to govern and rule, rather than use brute strength alone to pursue their ends.[5a]

Sigmar himself told them that they were each worth twelve mortals, since that day it has been considered a mark of disgrace to be sent back for reforging before they have killed at least twelve foes. In contrast if they have not yet fallen in battle they are considered living saints. [4a]

Each of the Stormcast from the Tempest Lords are recruited from ancient dynasties of the Mortal Realms that are accustomed to rulership.[3][5a] With many of the Tempest Lords being drawn from a line of warrior-aristrocrats that hail from the Realm of Hysh.[5a]

As is common among many Stormhosts, the Tempest Lords have taken to worshipping an additional god who they see as their patron alongside Sigmar. In their case they venerate Mirmidh and through her teachings have embraced diplomacy, rulership, and grand strategy as important parts of their Stormhost's doctrine and culture.[5a]