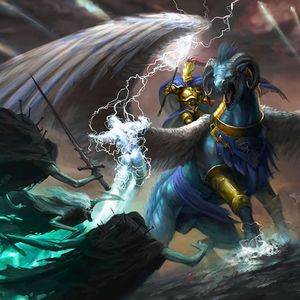 A Tauralon's curling horns can be used for ramming with enough force to shatter castle walls. It can also create trails of astral light that settles like stardust on enemies which itself causes no harm but causes arrows of Judicators and eldritch bolts to veer straight towards the illuminated target regardless of their original course.[1a]

They hail from the Aetheric Void, where they prey upon magic-eating void-shoals that also reside in the Void. Entire flocks have taken to roosting upon the Sigmarabulum.[1a][2a]

They chase passing meteorites and shooting stars for sport, headbutting them between one another. Though if they find a more interesting target, such as Mustori and astral projections of Lord-Arcanums, they will knock the meteorites toward them. Lord-Arcanums that survive this game with their spirit intact and join in by sending the meteors right back again can win the respect of these beasts, this is often the method used by Lord-Arcanums to convince Tauralons to become their mounts.[1a][2a]