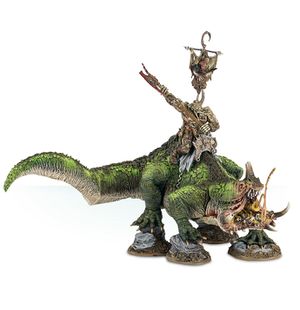 Tamurkhan the Maggot Lord is the leader of the Tamurkhan's Horde and one of Nurgle's most powerful mortal champions. He is a bringer of death and decay, enacting the will of Nurgle across the Mortal Realms. While Nurgle is a fickle god, Tamurkhan was once one of his most favoured sons and often heals him battle. With a great bellowing roar, his horde crashes down on his enemies relentlessly.[1b]

His true form is that of hideous maggot-like parasite that can burrow and possess the bodies of his enemies. He can do so even in battle, taking over the body of a hero after his current host is slain in battle.[1b]

He rides to battle mounted atop Bubebolos, a mighty Toad Dragon.[1b]

He is arrogant, savage and loves nothing better than the challenge of hacking apart the lords of his enemy.[1b]

In battle he wields a weapon called the Black Cleaver.[1b]

His loyalty was valued by the god of disease, who planted a piece of his soul in the Realm of Chaos to be regrown and resurrected after the destruction of the World-That-Was. He repaid his god by delivering rot and ruin to the unfaithful of the Mortal Realms.[1a]