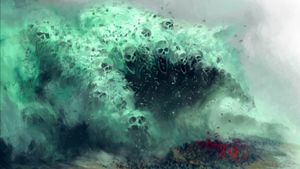 A Suffocating Gravetide crashing into an army.

Suffocating Gravetide is a predatory Endless Spell of Shyish that causes the spirits of the dead rise from the ground and surge forwards in a Suffocating Gravetide to smother the living and drag their souls down to the Realm of Death. Once the souls of the dead would have remained undisturbed in the underworlds of the Shyish but the Shyish necroquake sent surging outward to the realms they inhabited in life allowing wizards to pull the souls of the unquiet dead to send them in a great wave to engulf their enemies.[1][2]

When summoned the ground and the dead buried within it, rises up with a whispered curse in a destructive tidal wave.[2]

As the gravetide surges anguished moans pierce the air and fill the minds of those who hear them with the final dying memories of the fallen, they bring a smell of mouldering skin and desiccating marrow, mingled with the bitter scent of freshly turned soil. Flesh-fattened worms foam as the rushing undead wall grows higher and gathers speed and the jaws of the spectral faces gape widest the moment the wave’s crest crashes into the living. Victims of the Suffocating Gravetide find themselves fighting for every step while being dragged beneath the churning loam where the currents of death magic pull them ever downward. The lucky few are torn to pieces by the savage swirl of spirits and earth-matter but most are entombed within the ground, their bodies broken and left to die of asphyxiation. However even death will not end their suffering and their souls will be churned up to join those that had brought about their demise, causing the Gravetide to rise up again and again. [1]