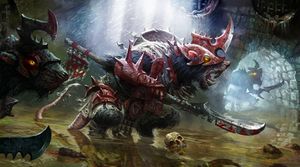 Stormvermin are the fighting elite of the Clans Verminus, known to be the largest and most aggressive of the Skaven. They are easily distinguishable from the lesser Clanrats as they are a full head taller, with thick, muscular necks and a powerful build.[1][3]

They are led by Fangleaders and supported by Pack Drummers and Standard Bearers.[2a][2b]

These Skaven are marked from birth by their stature, their dark-hued fur and their willingness to savagely dominate the lesser Skaven around them.[1]

Stormvermin clawpacks and are assigned important duties such as acting as the retinue of bodyguards for Clawlords, Warlord and Chieftain, and defending crucial clan assets such as armouries, food stores or breeder pens. In battle they are deployed as vanguard line-breakers, enforcers and shock troops. In return, Stormvermin are given favoured status with the right to feed first upon the fallen from battle or any insolent enough to attempt before them and are even granted their own slaves and warrens to lord over.[1][3]

Stormvermin have access to the best gear in their clan's armoury, like clanking armour, wickedly-sharp Rusty Halberds and rickety and slipshod Clanshields.[1][2a][2b]