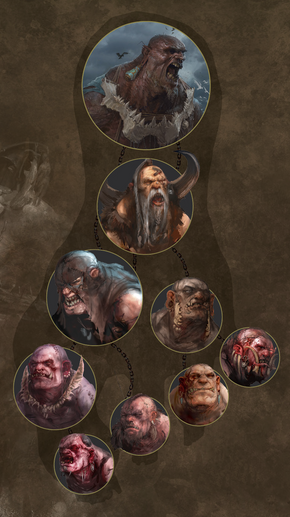 A Stomp is the primary grouping of gargants, which wreak catastrophic damage across the realms.[1a]

The civilised races of the Mortal Realms refer to a grouping of gargants as 'catastrophes', due to the incredible level of devastation these behemoths leave behind them. A group of gargants can cause more damage in a single day than an entire army causes over a month-long campaign. However, given that gargants generally struggle with words as complex as 'cat-as-trophe', often getting stuck after the first two syllables, they instead prefer to call their groupings stomps.[1a]

Stomps are named differently based on the type of Mega-Gargant leading the stomp:

A stomp is comprised of those gargants that know each other well enough not to fight all the time. Often they hail from the same family with other gargants coming to join them over the years bolstering their numbers. They usually number no more than a couple dozen members as gargants are a fractious lot, and expecting any more beyond that to work is to invite trouble. However, there is a loose hierarchy, also known as a 'stomping order' that defines each grouping, which are based roughly on the shape of a gargant's foot.[1a]

The Big Heel is the largest and fiercest gargant in the stomp. He is typically a Mega-Gargant, and if not, the largest member of a tribe that has yet to hit the big time. The Big Heel is the ultimate authority of the stomp, and his raw might might forceful personality means that Mancrusher Gargants under his rule will adopt his favoured culture and tactics.[1a]

Other Mega-Gargants in the tribe are said to be 'under the heel', indicating they lost a fight to their leader, and are expected to go along with the tribe's Big Heel until someone stronger takes his place. The immediate rivals to the Big Heel may very well be his own sons, or be from further afield and beaten into them that the Big Heel is the true alpha of the stomp. Should the Big Heel ever show weakness or become badly injured, one of these champions may level a leadership challenge. These massive brutes form the main bulk of the stomp.[1a]

Mancrusher Gargants that join a stomp are known as Footsloggas. They are form the gnarles, leathory toes to the Mega-Gargants' foot. These Mancrusher Gargants sometimes gather in small groupings of their own, perhaps having originated from another group that had been subsumed into a greater stomp. Just as it is common for gargants to have three, or five, or six, or (in the case of Clubfoot Gorg) no toes at all, a stomp may have any number of Mancrusher Gargants. This abstraction is of little problem to gargants, who can rarely counter higher than three. Generally these Footsloggas are considered expendable by the Big Heel.[1a]

Mancrushers Gargants sometime gather in small groupings of their own. The number of Mancrushers 'toeing the line' under their larger masters varies considerably, normally from three to six. This organisation is very loose, however, for gargants can rarely count higher than three.[1a]