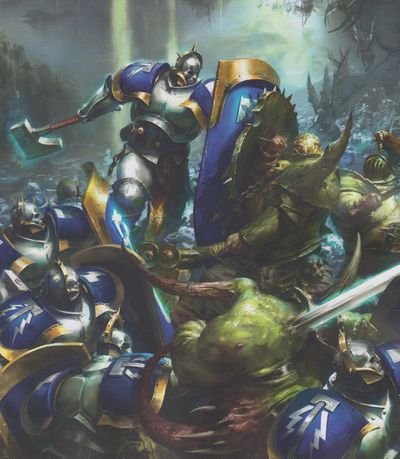 The Steel Souls is a Warrior-Chamber of the Hallowed Knights.[1]

The Gates of Dawn

Near the beginning of the Age of Sigmar, Gardus Steel Soul leads this chamber to secure the Gates of Dawn, a realmgate that leads to the Realm of Aqshy. They quickly crush the followers of Nurgle in the vicinity. [4a] The gate however had been corrupted and it lead only to the garden of Nurgle in the Realm of Chaos and from the portal emerged the Great Unclean One Bolathrax, accompanied by his Rotguard. As the knights falter, Sigmar hurls down the Astral Templars to reinforce them, yet even together they are no strong enough to hold the field as chaos counters with a horde of Skaven from a gnawhole led by a Verminlord Corruptor. Gardus enters the realmgate to try and close it and attempting to stop him, Bolathrax destroyed the gate, itself and Gardus. A large wargrove of Sylvaneth arrives and with their aid the remaining daemons are banished.[4b]

After the awakening of Alarielle, the Steel Souls, Sylvaneth and the duardin Root Kings destroyed the followers of Nurgle.[5]

Grymm led the Steel Souls in pursuit of the beastmen herds all across the Plains of Vo, tearing down herdstones, destroying and burning their festering camps. The last stand of the bestial folk was in a ruined harbour in the Verdant Bay. The next step was to assault the three vast sargasso-citadels that guarded the entrance to the bay which were held by the Order of the Fly.[5a]

Following a meeting with Sigmar himself, Gardus rejoined, bringing Tornus the Redeemed with him at the god-king's request. As the Stormcast attacked, the Order of the Fly sought to open the realmgate - the Gate of Weeds, to the Plague Garden of Nurgle. Following a duel with Blightmaster Bubonicus, Grymn sought to close the opening gate, using his warding lantern to hold back the tide of daemons and corruption, yet in turn he himself was sucked into the realm of Nurgle with several other Stormcast.[5b][5c]

Whilst Grymn and the other seven stormcast fought to survive, his compatriots cleared the sargasso-citadels, even capturing one of the Order of the Fly, Gatrog, Lord-Duke of Festerfane. Gardus, now back in command, entered the garden with much of his chamber through the Gate of Weeds to rescue his lost brothers and sisters.[5c][5d]

They succeeded after passing through the seven levels of the garden. The Steel Souls returned to the Realm of Life following the sacrifice of the Lord-Relictor Morbus Stormwarden.[5e]

Sigmar directed the Steel Souls to attempt the rescue of many soul-pods held captive and hostage by Tzaangor in the corrupted Hexwood that grows atop the Nevergreen Mountains in the Realm of Ghyran. Together with the Faithful Blades Freeguild Regiment they fought through ambush and worse to try to cleanse the wood of the Beastmen and free the Sylvaneth seeds. After much hard fighting, their Lord-Celestant and Liberator Serena Sunstrike were able to free them, allowing the newly born Sylvaneth take their own vengeance on their captors. The grateful tree-folk then marked the armour of the pair with distinctive knotted patterns as a token of esteem.[1]

The Steel Souls were one of three chambers of the Hallowed Knights sent to help in the founding of Caddow in Shyish. They were key in fending off attacks from the Slaaneshi Warriors of Chaos and Beastmen who were inhabiting the area.[6] Gardus himself actually helped convince Nagash to allow Sigmar control of the city, now renamed Gravewild, as well as the return of Tarsus Bull-Heart, in exchange for killing some of the forces of Archaon besieging Nagashizzar.[6a]