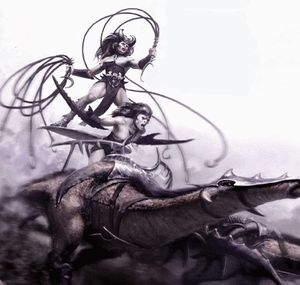 A Seeker Chariot pulled by Steeds of Slaanesh.

These beasts are serpentine daemons with two long, muscular legs, making them faster than a horse, able to outpace any chaser for an eternity with their sinuous, undulating bodies. Their delicate, bird-like feet are clawed which they kick to viciously defend themselves. The colour of their hide is in constant change between soft blues, pastel purples and gentle ochres.[1c][1a]

Its head is narrow, with a slender snout and eyes that glint with the energies of their gods. Their mouths have a toxin-coated tongue that is several feet long, capable of lashing out like whips or ensnaring their victims. It's able to taste the desires of mortals, their swollen sensoriums giving them the ability to detect fear, joy and lust on a breeze from a mile away, and their soul, making them shudder in delight.[1c]

These daemons sounds are described as lilting hoots.[1b]

These creatures, like other Daemons of Slaanesh crave sensory experiences and have an insatiable curiosity. As such they will quickly investigate anything new or different.[1c]

These creatures fear boredom and blandness and are not witty enough to value self-preservation.[1b]

Their herds inhabit the glorious pastures of the Slaanesh's Domain in the Realm of Chaos and drink from its rivers of scented oils and exotic spirits.[1c]

These creatures are hard to tame as the beast can run at incredible speed for an eternity and only by exploiting its curiosity can they be captured. Cunning Daemonettes, and sometimes mortals, lure them with objects like shining gems or silvery baubles or be ambushed while drinking from the rivers of exotic spirits or scented oils. When they are distracted they can sneaked upon and bound with chains of fine gold or silver around their necks. The creature will try to escape, with their claws and tongue, but those that capture one can swiftly subdue the creature and make it their own.[1c]

When it comes to the Steeds used by Hellstriders, Slaanesh herself sends them steed offering a dark bargain for those that wish for greatness but lack the traits needed to achieve them. This pact leaves the mortal unable to dismount from his steed, hopelessly addicted to the intoxicating energy that they get from giving the souls of their foes to their god.[1c]

The armies of Slaanesh often use these creatures in war and can be found as part of the following units: