From Age of Sigmar - Lexicanum
(Redirected from Starpriest)
Jump to: navigation, search 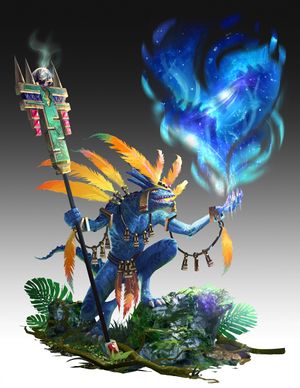 Starpriests are Skinks gifted with an intelligence superior to other mortal races. They are like wizards, excelling in the ability to call the destructive energies of Azyr.[1]

On occasion, the activation of a spawning pool will yield but a single skink. More often than not, these skinks will be proven skilled users of the magical arts, destined to become Starpriests. A Starpriest possesses a instinctive grasp of the winds aetheric, which is further honed by tutelage from their Starseer masters. Several Skink Starpriests will attend to a single Starseer, and the most promising of the Starpriests may even find themselves serving a slann directly. Besides expertise in the magical arts, Skink Starpriests are amongst the most gregarious of their breed and possess a natural talent for dealing with non-Seraphon. The Fangs of Sotek particularly make use of Skink Starpriests, and within the Free Cities they serve as chief ambassadors to the city authorites at the behest of the skink embassies.[3a]

While the Starpriests are traditionally trained to divine meaning from celestial portents, they are generally more provocative in their use of magic than the contemplative Starseers. Starpriests prefer to unleash blasts of celestial lightning or scour enemy formations under the uncompromising light of the stars. Like many Seraphon leaders, Starpriests will carry ancient relics, such as serpent staffs. These staffs are used to channel the power of the twin-headed serpent, one of the many zodiacal leviathans that dwell within the heavens of Azyr. Such power is used to coat the jaws of their allies and their own blades in potent venom.[3a]