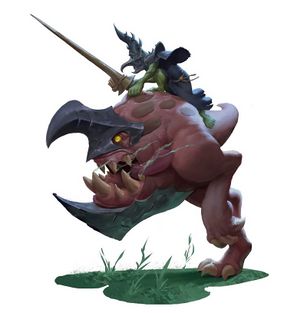 Squig Hoppers are crazy Moonclan Grots that ride upon bloated Cave squigs to battle, acting as remarkably effective cavalry. They have zero control over the bounding, erratic movement of the mounts they try to steer.[1][3]

Squig Hoppers are held in awe by the majority of Moonclan Grots and gather around to hear their mostly fictitious tales. In truth they only cling on for their lives while trying to steer their erratically bouncing steeds into the foe, where the creatures' snapping jaws and ripping talons make short work of the enemy. All these cackling Grots can truly do is flaying wildly and swing their stabbas at anything that comes near them.[1][3]

Some Squigs sit for long enough for an aspiring Grot Riders to climb atop them. Many end up devoured by their mounts, but the luckiest and deranged managed to hang on.[1][3]

These Squigs have been fed a special brew of puffgut-balls and Hopsplatter fungus which boats them with gastric gases, giving them a surprising amount of lift but also makes them ill-tempered and ferocious due to the uncomfortable experience.[1]

Boingrot Bounderz are Squig Hoppers that survive their usual battle or two before being devoured by their mount, run through by an enemy or killed in an accident.[1]

They are show-offs and wear moon-shaped helms, called Loon Helms, believing that no squig would dare eat the Bad Moon which seems to be true at times. Rest of the time these big armoured helmets protect the grot from blows to the head. Bounderz become better at clinging to their steeds that they can spare attention to fighting as well. They are armed with long pokin' lances, which when driven by the meteoric momentum of a hurtling squig can punch right through plate armour to skewer the victims inside. Boingrot Bounderz are excellent line-breakers and shock cavalry with the added bonus of being able to bounce clean over intervening obstacles to drive their charge home with vicious force.[1][2]