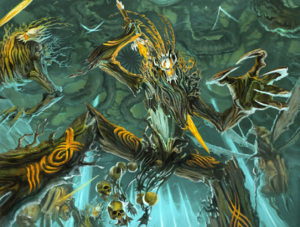 The Spirits of Durthu are powerful sylvaneth can be found either fighting alone as embodiment of Alarielle's will, or as a group as the fabled Sons of Durthu. With their every deed they strive to be worthy of the legacy of legendary Durthu, and this determination makes them some of the most powerful warriors in the sylvaneth Wargroves. Unlike most sylvaneth, the Spirits of Durthu belong to no clan or glade, instead they answering directly to the Everqueen and when she sends them to battle they stand in defence of her chosen commanders. [2a]

In appearance they resemble Treelords, but have distinctive flickering energies that dance about their guardian sword and within their body. Filled with lore and wisdom, they are ideal advisors to their divine creator and favoured spirits such as the Sons speak with her authority when she is not present.[1b]

Alarielle's personal bodyguard and agents, bonded to each other on a level that resembles a shared consciousness and would even kill friends or fellow sylvaneth to protect their queen. However despite their devotion, they have stirred their queen to anger and even rage on occasion.[1b] Twelve of the Sons were sent into the Ulgulands to seek a powerful weapon but following several great battles, all contact with them was lost, but hope has not been lost that they may retain with their prize.[1c]

During the Age of Chaos, shortly before she retreated to Athelwyrd she was so enraged by them that she banished them not only from her presence but from her lands - although they were devastated they obeyed and scattered across the Mortal Realms.[1c] When she was reborn at the beginning of the Age of Sigmar her first action was to summon them back.[1b]