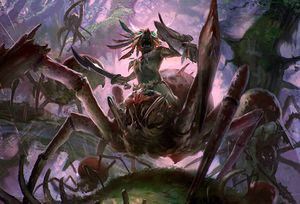 A Spider Rider Boss riding atop a Giant Spider.

Spider Rider are a Grot unit of the Spiderfang Grots warclans, that ride Giant Spiders into battle and are organized into Skittermobs.[1][2][3b]

These units are led by a Spider Rider Boss and supported by an Spider Totem Bearer, or Icon Bearer, and a Bone Drummer.[2][3a][3b]

They appear as if from nowhere, their dexterous mounts skittering up walls as if they were flat ground or dropping from above, allowing them to easily move past the densest terrain or formidable fortifications. When they come out of their web-choked lairs they often come out by the thousands, squeezing out of dark gaps to surprise their foes. Then they encircle their foes as the wild-eyed grots that hang on their saddles shot poisoned arrows, attack them with crooked spears or let their spider's fangs, that glisten with lethal venom, do the job.[1][2]

Spider riders are known to take their enemies alive by paralyzing them with venom and abducting them with lassos made of web. Their victims are then whisked off into the dark, to be fed alive to the arachnid demigods they worship. [4]

Their mounts are as widely varied as the grots themselves; and spider riders have been seen atop arachnids such as the Blistermere Skulkback, Blue Cliffleaper, Greyfang, Chamonite Ironweb, and Shrieking Manglespitter. No matter the breed of beast, one can be assured that their fangs are filled with deadly venom, and their mandibles are strong enough to pierce armor. [4a]

Spider Riders are armed with Crooked Spears paired with Spiderfang Shields and Spider-Bows, that they shoot poisoned arrows with.[2][3a][3b]