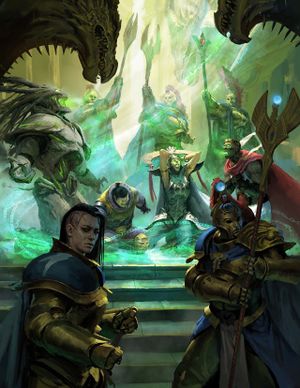 The Soulbound are an ancient order who were first formed in the Age of Myth. [1a]

The Pantheon created the Soulbound to be guardians of the Mortal Realms but also servants of the gods. [1a]

The disintergration of the Pantheon of Order shattered caused the Soulbound to fade out of memory. [1a]

Sigmar has sought the aid of the other gods to resurrect the lost order and although some refused or did not answer, some of old pantheon answered, and now the Soulbound walk again in the Mortal Realms. [1a]

Those who are Soulbound have their essence entwined with other beings, binding your essence together until death - although it is a painful process that not everyone survives. Enduring the agony grants the survivors a powerful tether and conduit allowing them to draw upon each other’s essence and guarding their soul from Nagash. This group of bound indivduals is known as a Binding. Stormcast Eternals are unable to become Soulbound. [1a]

A Soulbound heals quickly and does not age - but when they die their souls shatters in an explosion of light and energy, Whether the soul is truly destroyed or as Grungni believes, it eventually reforms, is unknown. [1a] It is almost unheard of for a Soulbound to leave their Binding, and stories are told that to do so causes agony but it is said that the gods who create them can re-link them to another Binding or even release them for thier obligation but these may be mere legend. [1b]

The Free Peoples tend to regard the Soulbound and Stormcast in a similar way - as powerful heroes worthy of respect. [1c]

The Daughters of Khaine whilst acknowledging that a Souldbound sister was chosen by Morathi to serve in this way are aware that they are no longer considered part of any temple of Khaine and so treat them with respect but suspicion given that they travel with outsiders who should not know the secrets of the cult. Others of the Free Peoples simply see them, like the other Daughters as warriors who fight without mercy against the forces of Chaos and the Undead.[1d]

Most of those who become Soulbound have lost or have become estranged from their lodge with many being grimnyn. As they will no longer have children, this ensures that no ambitious Runeson ever even considers this path. It is difficult for other Slayers to know how to react to Soulbound, weighing that whilst it is a great honour with potentially great glory to be earned, they are also serving a god other than Grimnir. What is worse is that Soulbound Fyreslayers generally do so without pay, so some of them ask their companions to provide some token remuneration. [1e]

Trust between the Deepkin is already rare, so the idea that one of their kind might bind themselves to a group including non-Aelves whilst also leaving their isolation is near unthinkable causing their fellows to regard them as insane. Some Kings and Queens however realise that Ambassadors to the other inhabitants of the realms are needed and give their reluctant blessing to become Soulbound. [1f]

Ever pragmatic, the Overlords consider the prospect of becoming Soulbound as entering into a lifelong unbreakable contract. In exchange for serving a god, one gets a extended lifespan, signifcant opportunities for profit and glory but more importantly an immunity to the paranoia that aether-gold can provoke. Other duardin of the Overlords encountering a soulbound are likely to simply ask was it worth it? [1g]

To the Undying King the Soulbound are hated abomination from the Age of Myth and he is doing everything in his power to wipe them from the Mortal Realms and memory. [1i]

Sylvaneth grow towards a specific purpose, deeply aware of their defined role and so becoming Soulbound gives them freedom to explore the world and peoples beyound their own enclave. Becommin Soulbound means that their lamentiri are destroyed and their memories and experiences will never be part of the spirit song of the Sylvaneth. Only Alarielle may ask them to take this path, no other god would dare, and it breaks her heart each time to loose their souls in this way. Other Sylvaneth treat such Soulbound, and their companions with great respect.[1h]