The Soulblight Gravelords are the legions and dynasties of undead led by Soulblight vampires. On those nights where where the skies are darkest and the winds blow cold, the Gravelord hosts rise from their crypts and march under the sinister glow of the realms' moons and clouds of shrieking bats. Directed by the will of the their vampiric overlords, they are a constant scourge upon civilisation, filled with the cruelty and malice one would expect of Nagash's champions. These vampiric champions lead dynasties of their vampiric kin, accompanied by allied Deathrattle Wight Kings and covens of Necromancers able to raise hordes of Deadwalker zombies.[3b]

Parodying the noble houses of Azyr, Soulblight vampires are linked through a complex web of lineages and bloodlines, many of which possess their own particular quirks. The greatest serve in the Legions of Blood and Night, the armies of Mortarchs Neferata and Mannfred von Carstein respectively.[3b] The two Mortarchs are amongst Nagash’s foremost generals and command vast undead armies known as legions filled with hordes of corpse-warriors and beasts of the grave. In the Mortarchs’ absence vampiric majordomos and lordlings who are often either sired directly by the legion’s overlord or hail from client dynasties that have proven their loyalty and capability are entrusted with carrying out out their masters’ agendas.[1b] 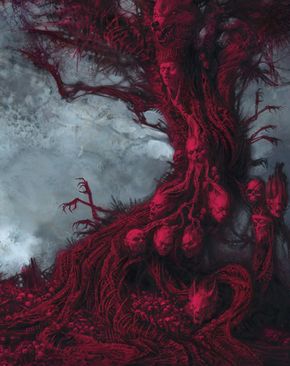 Hierarchy of the Vyrkos Dynasty from its undead Godbeast founder to its court.
Main article: Soulblight Dynasty

Beneath the legions are innumerable dynasties each usually stemming from a single vampire patriarch or matriarch whose particular curse permeates their brood each possessing its own traditions, heraldry and rivalries. Many such dynasties are entirely supplicant to a singular legion and on occasion, a Mortarch may even take direct control of a dynasty’s forces either to exploit their skills in war or as a gesture of dominance but often allow the masters of a dynasty to retain nominal joint command. The greatest dynasties such as Vyrkos, Kastelai and Avengorii are held in almost as much dreadful awe as the legions themselves even though they tend to be largely disregarded by Nagash until their aims align with his own. While some dyanties conquer grave-empires, others follow their bloodlust like the infamous Wraith Fleet of Varkos Varactyr, whose army of drowned mariners and rotting titans of the deep sails across the Mordacious Sound to menace the southern coasts of the Great Parch.[1b]

In addition to undead hordes summoned from scattered gravesites, vampires are also escorted by courts of attendants, warlords and sycophants. Wight Kings, the reanimated skeletal remnants of ancient chieftains and monarchs whose tactical prowess remains sharp act as frontline champions for the Gravelord armies, leading Deathrattle warriors summoned from ancient battlefields to serve their will. Weaker Wight Kings are vulnerable to a vampire’s sorcerous control but the greatest possess a will equal to any Vampire and rule their own empires, sending subordinates to treat with vampiric rulers of stature. Necromancers are Deathmages that ensure the undead armies remain filled with vigour and resurrect those who fall. Vampires offer patronage to as many promising Necromancers as they can as this lessens their burden on the field allowing them to concentrate on slaughtering the foe and sate their thirst.[1b]