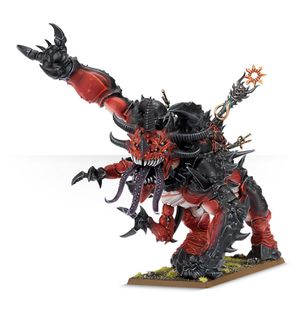 A miniature of a Slaughterbrute.

Slaughterbrutes are massive claw-beasts, hulking Monsters of Chaos, muscle and aggression, that smash into battlelines and leaving only bloody ruins behind. These creatures cannot be broken by conventional means.[1][2]

Slaugtherbrutes have four front arms of differing sizes, a muscular body, and a massive head with a triplex tongue, a cluster of eyes and multiple rows of teeth. It's skin is chitinous, creased and spiked, and the creature stands on hoofed feet. It has razor-tipped claws and slashing talons. Chaos icons, a ritual dagger of binding, and various weapons skewer into its back. Some have no tongue; instead having a grimacing maw and growths protruding from its face.[2]

These creatures can be marked with the Mark of Khorne.[3b]

Their wills are bound to Chaos Champions, a Slave to Darkness or a Khornate mortal, through flesh-rituals, involving carving runes of domination onto its back and embedding cursed blades of binding into its flesh. When it loses its master, through death or distance, it will run rampant, becoming a terrifying force of destruction that attacks anything it comes near.[1][3a][3b]