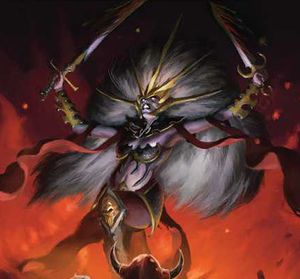 Slaughter Queens are the warrior High Priestesses of the Khainite cult of the Daughters of Khaine.[1a]

They are awarded this title by Morathi for their skill at arms, favouring it over their zeal.[1a] While the power and authority of each rank of the priesthood of Khaine is in a constant flux, the Kraith value Slaughter Queens above the others. Awarding the leaders of a War Coven the title of Bloodqueen.[2a]

The Slaughter Queens are the martial leaders of the war covens. A Slaughter Queen can can spur her war coven on to greater feats of violence or rally their wavering nerves through the sheer force of her will. A Slaughter Queen has learned the killing words of power – appellations of Khaine that when shouted at the correct pitch can smite down an enemy or even blunt an incoming spell.[1a] In combat, a Slaughter Queen wears little armor, instead rellying on their acrobatic skills to dodge and evade enemy blows.[2a]

In war, a Slaughter Queen fights with a sword in each hand, slaying all in her path. One sword is known as the Blade of Khaine and is blessed with godly swiftness, allowing the Slaughter Queen to strike with blurring speed. While the other sword known as a Deathsword is imbued with Morathi's scorn, enchanting the edge with unrivaled sharpness, making it capable of slicing gaping clefts in flesh or armour with even the slightest blow.[1a]