A kharadron sky-port from afar.

Skyview of a kharadron sky-port.

The streets of a kharadron sky-port. 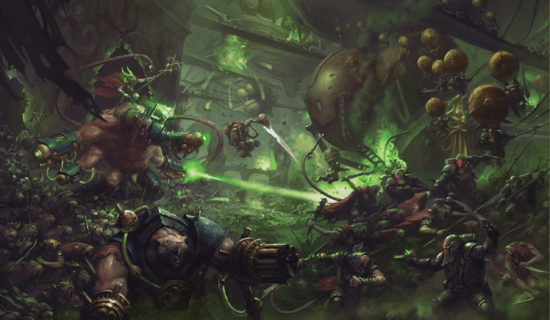 Failed skaven invasion of the underbelly of a kharadron sky-port.

Sky-ports are massive floating cities in which the Kharadron Overlords dwell. The earliest ports were mere floating fortresses and while they retain massive firepower modern sky-ports are centres of trade in the Mortal Realms where thousands of Duardin live and visited by many more races. According to the Code, a Sky-port only controls the airspace within the span of three cannon shots and beyond that is the high airs which is neutral territory. The borders are guarded by floating fortresses armed with arrays of cannons and swivel-guns known as Zunfar towers.[1c]

The size and layout of a sky-port can vary but most are constructed as a series of concentric squares with the administrative districts at the centre. The outer areas consist of vast dockyards and are often the only area allowed. Internal transport is provided by endrintrams and steam-gondolas that travel through the canalways that run through the sky-port. The canals also function as sewers and water-pipe routes as well as waste-disposal systems that release waste to lands below. [1c]

Beyond the dock districts are warehouses, aether-factories and other industrial zones run by lesser-chartered guilds. While aether-gold can be processed without pollution the Kharadron Overlords’ heavy industry uses a wide variety of chemicals and metals thus smog and acid rains are common. Endrin-bellows and dispersal fans are built to clear the worst of the contamination but some such as Barak-Nar’s relentless industrial drive and Barak-Zon’s weapons industries create even greater levels of pollution and cause diseases such as sky-miner's consumption, ironscale and the glowlung. While Aether-Khemists Guild of Barak-Nar has dedicated an entire arm of its alchemical labs to research cures using subdermal infusions of aether-gold for now only the richest residents are able to afford it. Barak-Thryng’s refusal to utilise wasteful, non-traditional methods of power generation has given it relatively clear skies.[1c]

Those that live in the industrial districts are canned together in almshouses and workhalls while the wealthiest reside close to its heart in gated towers and floating manses held aloft by a steady flow of aether-gold where Lord-Magnates and master industrialists literally look down upon those less fortunate. [1c]

At the centre is the nexus of government and is often a wondrous district that displays a city's greatest achievements. Here the Admirals Council gather and very few outsiders have ever been granted access to these. This is populated by minor armies of runescribes and dignitaries.[1c]

While Chamon is home to some of the most powerful sky-ports due to its richness in aether-gold, sky-ports can be found in every Mortal Realm.[2]