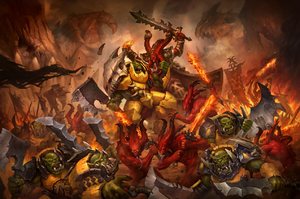 Skulltaker is a Bloodletter, a Khorne Daemon and the mightiest Herald of Khorne and has collected trophies beyond counting. Clad in a cloak adorned with skulls, he stalks the battlefield in search of the greatest champions to claim their heads after a brief salute with an upturned blade.[1a]

He’s a peerless duelist and wields The Slayer Sword[1b], a powerful hellforged blade. Predatory instincts allow him to strike at a foes weaknesses with ease. He rarely slays his foe in a single blow, instead, he seeks to cripple them and claim their skulls by wrapping his hand around their heads and searing the flesh from their bones until only a pristine skull is left. With a short twist of his wrist, he snaps the skull off the spine and carries it to his master. The skulls of his most worthy opponents receive a place on his cloak, the others are placed on spikes around the Brass Citadel.[1a]

He has felt defeat only three times, one of which was against Sigmar in the World-that-Was. His wounds took centuries to heal and now he hunts Sigmar’s warriors taking great pleasure in vengeance. Only Khorne knows when or where Skulltaker will take to the field. And his motives are known only to Skulltaker and his master.[1a]

Skulltaker is an ancient Khornate Daemon and he bears many scars. His horns hold skulls, he wears heavy brass armor with sculpted skulls and his ankle length cloak is adorned with the skulls of his worthiest oponents on hooks and tied to it with ropes.[2]