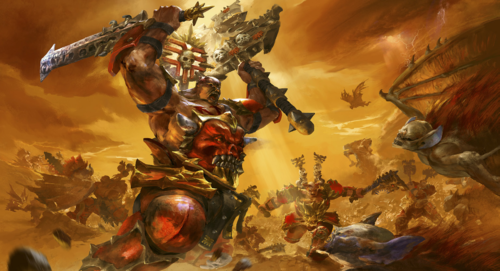 Skullreapers are warriors of the Khorne Bloodbound. [1a]

Skullreapers are drawn from the ranks of the Bloodreavers - although the lives of these marauders are typically brutish and short, those who survive grow more and more powerful with Khorne's blessing. Such a warrior must undertake the Trial of Skulls, a test that at it's core revolves around the Skullreaper securing the skulls of eight worthy champions per day. If this is not accomplished, they will wither away and die. Such an ignominious end offends the sensibilities of the warriors, who will turn on their own should they near the end of the day without taking their quarry. [1a]

The Skullreapers barrel into the fray with the force of a falling comet, hacking and tearing at their foes with frenzied brutality. Heads fly and ruptured bodies are sent hurtling through the air as the unnaturally strong killers smash their way further into the fray, searching for the worthiest skulls to claim. [1a]