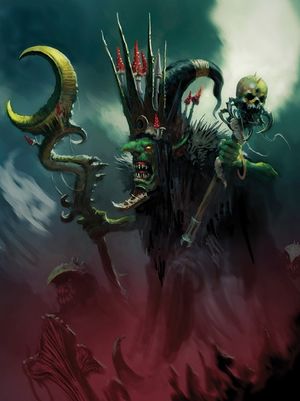 Skragrott the Loonking is the self-proclaimed King of the Moonclans and the ruler of the Gloomspite kingdom of Skrappa Spill.[1a]

Skragrott’s origins remain unknown and anyone who might possess such knowledge ‘disappear’. Thus he only came to infamy during the invasion of Ayadah. According to him the Bad Moon itself spoke to him while he slept whose voice filled his mind, telling him of its approach. When he woke, Skragrott claims that he was entirely covered in squirming insects that scattered to leave him coated in slime while a stiff fungal crown had sprouted from his scalp, its roots digging deep into the very meat of his brain. A skullheaded wand lay at Skragrott’s right hand, and at his left was a regal staff topped with a living and incredibly rare Badloon Bossfungus which was proof that Skragrott had been blessed by the Bad Moon, chosen to be its prophet and the ruler of all Moonclan Grots.[1b]

As the Gloomspite swept through Skragrott’s lurklair, the grots naturally looked to him as their leader while the few that refused were treated a violent lesson. The Loonking’s Crown greatly enhanced Skragrott’s cunning and gave him sorcerous powers to match the greatest Moonclan shaman. Under him the Gloomspite Gitz horde defeated orruks, humans and duardin who had been warring for Ayadah while the Bad Moon was hanging bloated above him, Skragrott led the frothing Gloomspite horde that transformed Ayadah into a twilight realm and saw him claim the mountain-sized rubbish heap of Skrappa Spill as his personal stronghold.[1b]

In order to accurately predict the movement of the Bad Moon he created the Fungal Asylum. While the Loonking’s sanity has taken a few knocks since beginning this radical scheme, he has successfully predicted the Bad Moon’s coming on four more occasions and each time he led the Gloomspite hordes to bring the Everdank upon the lands. With his victories a growing number of Moonclan lurklairs and even Spiderfang tribes recognise him as their almighty king.[1b]

When the defences of the Stormvaults started failing, Skragrott, by divine command of the Bad Moon sent the Loontenant Snaggit to the Fungal Asylum to collect a prophecy.[2]

Skragrott describing the Bad Moon and his relationship with it.