From Age of Sigmar - Lexicanum
(Redirected from Skitterstrand Arachnarok)
Jump to: navigation, search 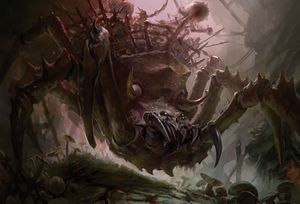 An Arachnarok Spider with a Flinger.

Arachnarok Spiders are the living incarnations of the Spider-God summoned into war by the shamans of Spiderfang Grots when the full wrath of the tribe is aroused. Often grots ride them into battle on top of crude howdahs, sometimes carrying catapults that hurl spider-filled webs or platforms for their wizards to unleash their stinging green sorcery. They inhabit bone-filled pits filled with corpse mounds that are the grots' sacrifices to their god.[1]

They have thick chitin that turns blades, bullets and bolts away. They use their legs to spear warriors before sinking their gigantic fangs into them. These eight-legged monstrosities are known for stalking and entrapping entire gor-kin warbands and clans of Sylvaneth, as well as larger prey like gargants and Cygors. Even entire populations of border villages and cogfort garrisons that settled close to their nests have been ensnared by Arachnarok Spiders. The poison contained within the Arachnarok's silk is so potent that in a few hours a human entwined in them would be reduced to a jelly-like morsel of putrefied flesh, a protein-rich glob ready to be consumed. Despite their large size, they can noiselessly encircle their prey's dwellings within strands of webbing thicker than an orruk's arm. Larger creatures are incapacitated with their flesh-dissolving venom delivered by their large fangs, allowing the Arachnarok Spider to safely drink up the liquefied innards of its prey.[1][4a] 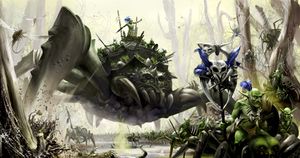 The most commonly seen Arachnarok Spiders are those that are still young and aggressively territorial and are easy for the Spiderfang Grots to lure from their nesting pits by babbled shamanic rituals, bloodily slashed offerings and the thunder of tribal drums. Shanty-platforms are placed on the monster onto which the bravest grots quickly swarm. These living war-platforms typically lead the stalktribes' charge. The spiders have no interest in the war plans of the grot leaders and only obey their own predatory instincts and hunger. In battle Arachnarok Spiders scuttle across the battlefield to pounce upon whatever unlucky prey that caught their attention, impaling or swatting aside horrified enemies as their fangs snick heads from shoulders and hold struggling victims in place while digestive acids are injected. They even use their bulk as a weapon by rearing up over massed foes to come crashing down upon the enemies. Spiderfang Grots riding upon the Arachnaroks' howdahs cling on for their lives while madly cackling. They let loose poisoned arrows with their Spider-Bows and jab at victims with flint-tipped Crooked Spears whenever they gain a chance. The grot crews have little control over the Arachnarok, something they do not care about.[2a][2c][1][4a] 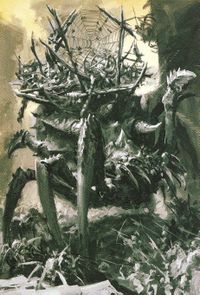 As Arachnarok Spiders grow older, their personalities and appearances change. They become more patient and malevolent while their hides thicken and dull in hue and are more inclined to lurk in their lairs and allow prey to be brought to them instead venturing out. When these elder arachnids do join battle, their cooler temperaments and greater wisdom allow them to play more strategically varied roles. Many are fitted with Flinger platforms, a shanty-howdah variant with a sizeable catapult that throw wads of venom-drenched spider silk threaded through with sharpened bone shards which not only slam down into the midst of the foe with killing force, but also explode into an entangling cloud of sticky filaments. Victims are blinded and trapped, riders are dragged from their saddles, the workings of war engines are fouled and warriors' blade arms pinned by the tacky filth leaving them helpless against the whooping masses of Spiderfang Grots. The elder Arachnarok Spiders are also able to commune with Webspinner Shamans in the greenskins' venom-fuelled hallucinations and may deign to bear such a war-leader and his personal Catchweb Spidershrine into the fray where its vile blessings enhance the shaman's sorcerous powers. Seen as vessels of the Spider God's will, Spiderfang Grots are ready to fight for the honour of riding into war upon their backs.[2b][2d][4a]

Skitterstrand Arachnaroks are arcane creatures originating from the dark underworld of Evercrawl in the Realm of Death where the Spider-God is believed to reside. They spin their webs from the silken threads of mortality itself and pick their way through sprawling weaves of life and death, following the vibrations of powerful soul-magic, often created by mass violence coupled with the frenzied rituals of the Spiderfang Grots. They are able to create temporary Realmgates of funnelled soulweb with their sorcerous spinnerets which the Skitterstrand spiders use to burst through the skin of reality without warning to pounce upon their prey and drag them screaming back into the Evercrawl to feast on them at leisure. Their webs can trap the essence of Stormcast, ghast and aelf alike which are slowly drained by them, leaving behind barren spirit-husks. Countless fortifications have been breached after spiders the size of drakes appeared out of nowhere to feast on the screaming victims trapped within their own fortresses. They also understand the dire threat posed by Nagash and his ambitions and will protect their lair at any cost although they care nothing about the wider realms. Thus they prefer to strike wizards, especially the wielders of the magics of death.[2e][4a][4b]