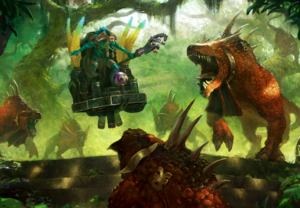 A Skink Starseer on a Palanquin of Constellations surrounded by Flesh Hounds.

Skink Starseers are the greatest Skink spellcasters and are only second to the Slann in arcane matters among the Seraphon.[1b]

Skink Starseers are the most venerable of skink spellcasters. Even amongst the Stormhosts of Sigmar there are few that can match a Starseer's connection with the magic of Azyr. Through a slight flexing of their will, a Starseer can divine meaning from a pattern of stars, anticipate stellar events with cosmic ramifications, and forsee the best path to bring about their enemy's downfall.[2a]

Most slann are served by several Skink Starseers.[2a] Skink Starseers are more attuned to the Slann than other Seraphon allowing them to understand a portion of the plan against the Chaos Gods. Unlike the Slann, Skin Starseers are more aware of the present, their minds unclouded by the fragmented memories of the aeons making them useful as guides that find missing pieces of the Seraphon's past and finding forgotten truths. Potent Starseers are even able to travel far from their masters while retaining a measure of his power, allowing them to lead Seraphon armies without the presence of Slann Starmasters.[1b]

The Skink Starseers are at the top of the skink priesthood's hierarchy and are held in awe by the Seraphon; even a Saurus will bow their heads in deference to a Starseer. Just as several Skink Starseers will serve a Slann Starmaster, several Skink Starpriests will serve a Starseer. The Starseers are generally tasked with ruling over sizeable districts within a temple-city or their own zigguarat-ships within the Seraphon fleets.[2a]

Skink Starseers can shape Celestite and Star-Stone from which Seraphon weapons are created. Bending these celestial materials to their will, they create palanquins that not only carry them to battle but also enhance their already formidable astromagical abilities.[1b]