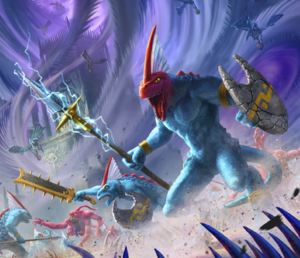 While chest-high to most men they are dangerous fighters that can easily match their mortal counterparts, excelling at coordinated attacks and by working in perfect unison skink cohorts strike at weak spots of the enemy or overwhelm unprepared targets.[1a]

The skink are by nature skittish creatures and have turned this quality to their advantage, preferring to engage their foes at range.[10b] Unlike their Saurus cousins, skinks often seek to use their cunning to achieve victory and seek out hidden pitfalls and aspects of the battlefield they can use to their advantage. In greater numbers they grow even deadlier with the light of their weapons burning brighter as they are fueled by the celestial essence of the skinks.[1a]

Some carry meteoric javelins and star-bucklers, some shoot forth crackling projectiles from boltspitters, and others fight up close with moonstone clubs.[1a] The venomous darts of the boltsplitter may have less immediate stopping power, but with a powerful breath a skink can propel a dart over a considerable distance.[10b]

These Skinks can act as rider or crew for a wide variety of mounts: