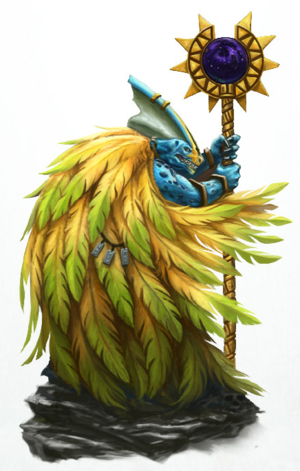 Skink Priests are attendants to the Skink Starpriests that are gifted with an intellect far beyond that of mortals.[3a] Skinks perform Azyrite star-rituals to subtly alter the outcome of a battle. Clad in a cloak woven from the feathers of star-eagles, Skink priests are armed with powerful star-stone staffs that unleash bolts of searing starbolts. [1b][2]

Due to the distant nature of the slann and the single-minded focus on war held by the saurus, the task of efficiently running the day-to-day life of the Seraphon falls to the skink priesthood. Just as several Skink Starpriests may attend a more powerful mage, such as a Slann Starmaster or Skink Starseer, a Starpriest will have a clutch of Skink Priests to act as lesser assistents and viziers in order to carry out the Starpriest's will. These members of the Skink Priesthood are made up of those skinks who have excelled themselves in war or craft. Their role in Seraphon society is to act as intermediaries between their Starpriest masters and the heaving masses of skinkdom.[3a]

A Skink Priest will be responsible for several divisions of skinks, with competition between Priests being fierce. The Priests can be found exhorting their followers to raise great monuments to the Old Ones or achieve the highest production quota of celestial weaponry and tool. Besides their roles as political leaders and wartime commanders, a Skink Priest will also have been trained by their Starpriest masters in mystical rites of the Seraphon. To this end, the Skink Priests will lead their followers in celestial rituals and veneration of the lost Old Ones. However, in times of crisis the Skink Priests may become prone to forming bizarre sub-cults that perhaps worship mystical jungle priests or the mysterious serpent god. These bizarre cults are tolerated by the slann so long as they do not interfere with the Great Plan.[3a]

In times of war, the Skink Priests are responsible for organizing their fellow skinks into cohorts and lead them into battle. This role is similar to that of Skink Chiefs, however a Skink Priest's concern is the motitivation of their charges rather than executing a wider strategy. Skink Priests are also often entrusted with examples of Old One technology; staffs of office that can unleash white-hot bursts of energy as bright as a star. This quality gives the Priests the most tangible link to their godly creator that most skinks will ever encounter, making the Skink Priests figures of great devotion in skink society.[3a]