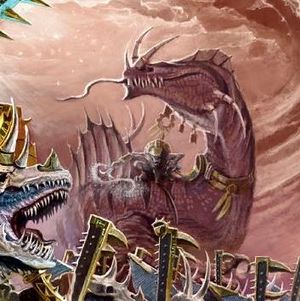 A Troglodon being ridden by a Skink Oracle.

Skink Oracles are a strange and impassive sub-species of skink that act as channels through which the slann may project their power.[4a]

Skink Oracles are amongst the strangest of all the skink sub-breeds. This is because there is no formal process by which a priest may join their numbers, but Oracles come into being via the direct magical intervention of the slann in the spawning process. In rare occurrence that happens perhaps once every thousand astrological cycles, a blessed skink will crawl out of their spawning pool with a forked tail. A physiological deviation will identify the skink as blessed as it is considered a mark of the Old Ones's favour by even the cold and rational Starborne.[4a]

Skink Oracles are typically impassive and distant, hiding their faces behind intricate golden masks. However, when the influence of the slann comes over them they become truly animated. With their eyes rolling back, bodies twitching, and rabidly frothing at the mouth, the cosmic power of their masters will cause them to babble out a stream of proclamations. Their words are then eagerly transcribed by nearby priests and recorded upon golden tablets of prophecy. With such a powerful connection between the Oracles and the slann, the Slann Starmasters can channel their sorceries through these skinks no matter the distance between them. Besides acting as channels for slann sorcery, the oracles themselves are capable spellmasters, especially in the matter of unravelling enemy magics. The artefacts these oracles carry with them are capable of undoing even the mightiest spells and dissipate them with pulses of ancient energy.[4a]

Skink Oracles ride to battle on huge blind beasts known as Troglodons that use their venomous tongues to sense their prey. Oracles are gifted with a measure of a Slann's foresight and can sense magic like others see shadows on the sky or feel a breeze on their face. Armed with a Divining Rod which is used to unravel the magic unleashed by the enemy, Skink Oracles protect fellow Seraphon from the sorcery of the enemy in the midst of battle while the Troglodon uses its deadly spittle to destroy enemies at a distance or with its venomous bite and clawed forelimbs up close.[1b][2][3]