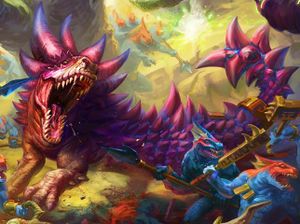 A Razordon being handled by Skinks.

Skink Handlers are those skinks assigned to the duty of handling the various beasts of war utilized by the hunting packs of the Seraphon.[1a]

One of the many duties performed by a constellation's skinks is the rearing of reptilian beasts to supplement the forces of the Seraphon. The chambers of the Seraphon temples lay rank upon rank of eggs incubated by the technology of the Old Ones. The Seraphon have all sorts of uses for the creatures that hatch from these eggs, including use on the battlefield. The creatures handled by the skink include the sharp-spined Razordons, the fire-breathing Salamanders, and even the great Stegadons. When summoned for war, these creatures are initially suffused with Azyrite energy before being teleported across the realms by the slann before slowly coalescing and taking physical form alongside their Seraphon masters. The task of handling these creatures is not without danger. For example, a sufficiently enraged Razordon can fill the air with a storm of spines, which can inadvertently pincushion the skink handlers prodding the beasts.[1a]