From Age of Sigmar - Lexicanum
(Redirected from Skeleton Warrior)
Jump to: navigation, search 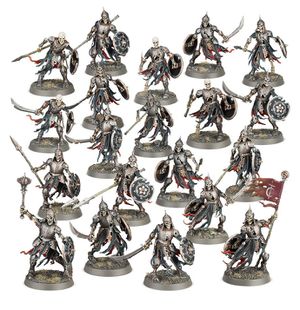 Deathrattle Skeletons are the skeletal thralls of a Deathrattle Kings, ready to fight for him when the clarion call of battle sounds. They fight in total silence slaying their enemies without rage, hatred or mercy.[1][2][3a][3c]

They are led by a Skeleton Champion and supported by Icon and Standard Bearers and Hornblowers.[2][3b][3c]

Deathrattle Skeletons are warriors as well as civilians and labourers of the Deathrattle Kingdoms. During wartime the Deathrattle Skeletons form the core of many Soulblight Gravelord armies. Armed with corroded weapons and faded banners, they advance in tireless lockstep with the sound of clattering bones. While weak individually, they mercilessly swarm the enemy in a vast tide, stabbing and hacking without thought for their own protection. Even the sight of grinning skeletons is a weapon as the enemy morale falters as they realise their own mortality.[4]

During times of peace they work endlessly in silence, mining mountains and stripping forests of wood, tilling pale corn-fields that when shucked leave only fingerbones and constructing sprawling mausoleums and tomb-complexes for their masters. Fiefdoms where according to Nagash’s necrotopia, sterility and unchanging order hold sway. Such nations have been raised across the realms, in Ghyran, Skeletons infested with corpse-fungi and throttle-vines march through the forests of Decrepita and in Ghur, their remains are spliced with the bones of that realm’s manifold predators as the vampiric chieftains and corpse-shamans believe that this infuses the Deathrattle with the animal fury of these beasts in battle.[4]

They are armed with pitted Ancient Swords and Spears paired with battered Crypt Shields. They are clad in corroded armour.[1][2][3b][3c]