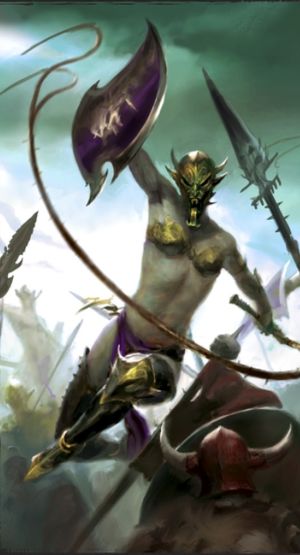 Sisters of Slaughter are a sub-cult within the Daughters of Khaine, considered extremists, even by the standards of other Khainites. To the Sisters of Slaughter, combat is everything and their entire lives are dedicated to it. Melee combat is worship of Khaine and each drop of blood spilt it is an offering to him.[1d]

When a Daugther becomes absorbed with revenge or consumed by the murderous spirit of Khaine, they take the vow of druharú and don masks of living metal. Once, these were worn solely for the Khielt-gadh, a ritual combat that recreated the mythic battles of Khaine against the Chaos gods. Through an excruciating rite using boiling blood and spells of bonding, those who seek to join the sisterhood permanently graft these helms onto their heads, the metal leering ever more cruelly as it scents blood. Then these Sisters fight ceremonial duels against already established member and only those that survive are accepted as full Sisters of Slaughter.[1d]

Sisters of Slaughter favor the Barbed whips known as kruip-lash, in their own tongue, it is the weapon of choice for the Sisters of Slaughter, and each practises her weaponcraft to levels of skill and precision only an aelf could achieve. With a simple flick of her wrist, a Sister can crack her kruip-lash so that it shears a gloomfly in half. An amazing feat, for the thumbnail-sized insects blend in with the mists of Ulgu in which they are found.[1d]