For Sigvald in the World-That-Was see: Sigvald. 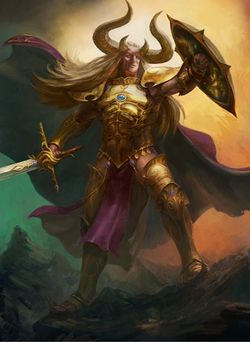 Sigvald the Magnificent, Prince of Slaanesh is a Mortal champion of Slaanesh and the leader of the Decadent Host warband who has been resurrected from the Old World and has returned to the Mortal Realms following Slaanesh's escape from his prison in Uhl-Gysh.[1][3][4b]

Below is a list of titles Sigvald is known for:

Sigvald is vainglory made in flesh, a beatific overlord with golden locks of long-flowing hair and not a single shred of humility or reticence remaining.[4b] A single scar remains on his body, a reminder of his imprisonment by the god of Death, Nagash.[4b] His tide of devotees is seemingly endless, with any one blow struck upon him earning the ire of thousands of his Mortal followers.

Having been abandoned by Slaanesh, what remained of Sigvald's soul lingered in the void until found by Nagash, the god of Death in the Mortal Realms, who trapped his essence in the Magnificent Mirror, a prison made of Shadeglass, as revenge for the death of Krell.[4b] The mirror was cursed so that it would reflect only the idealised image of whomever gazed into it, ensuring that Sigvald could never return again, and then cast into the pocked dimension of Uhl-Gysh, where it lay resting in the cursed city of Shadespire.[1]

The Chaos God Slaanesh was also later trapped in Uhl-Gysh by the aelven pantheon, led by Tyrion and Teclis.[1]

With the Dark Prince's burgeoning power in his prison in Uhl-Gysh, Sigvald fed upon motes of the God's essence that began to escape and began to regain a measure of awareness and control.[1]

The Magnificent Mirror was later taken by some Duardin privateers from Barak-Zilfin, who were overwhelmed by the treasure's overwhelming beauty.[1][4b] After fleeing to the deserts of Penultima in the Realm of Shyish, these Kharadron Overlords became obsessed with their prize and succumbed to thirst, dying while neglecting their basic needs.[4b]

The Magnificent Mirror was later found by a band of Hedonite Godseekers known as the Scarlet Cavalcade, led by Chaos lord Rashevious.[4b] Upon gazing upon the mirror, Sigvald summoned all his foul magicks to conjure the most twisted and grotesque image upon Rashevious, enraging the silver-haired champion to unspool his whip and lash out at the Mirror.[4b] This action gained the notice of the Dark Prince himself, and Sigvald was completely reborn in dark resplendence.[4b]

Upon his return, Rashevious and his followers bowed in supplication, amazed at the Magnificent's preternatural beauty.[4b] Sigvald's first act was to slay one in every sixth members of the Scarlet Cavalcade, before leading the Godseekers warband against the troggoths in retribution for the way he died in the Old World[4b]. He sent Blissbarb Seekers of the Scarlet Cavalcade into Penulmia's caverns, drawing out all the Geld-Prince saw to be ugly and vile.[4a] Entranced by the bright colours of the Scarlet Cavalcade, the troggoths came out of the caves, led by a massive Troggboss, and were peppered with toxic arrows imbued with the light of Hysh.[4a] Soon only the Troggboss remained, challenging Sigvald to single combat, who maliciously and spitefully obliged.[4a]

Sigvald's next act was to seek out his original weapon, the rapier known as Sliverslash.[4b] Though many Pretenders warbands claim to possess the blade, Sigvald quested towards the Palace of Pleasure deep within the Realm of Chaos, seeking out the daemon-artisan Gyll'Falai and forging a new blade with fragments of his former prison and six locks of Sigvald's golden hair.[4b] With Shardslash, Sigvald can now begin his conquest of the Mortal Realms in earnest, leading a vanguard of Myrmidesh Painbringers and his personal warband, the Decadent Host.[1][4b]

With his weapon now in-hand and his creation of his personal army, Sigvald now seeks revenge against Nagash for his imprisonment by striking out against the Ossiarch Bonereapers, not daring to invade Nagash's capital city of Nagashizzar.[4b] It is Sigvald's intent to bleed the Realm of Death with a thousand cuts, given that he now has all the time he needs to explore the hidden pleasures and pains that the Mortal Realms has to offer.[4b]

Sigvald is a master swordsman, considering himself the greatest duellist of the Mortal Realms.[4b] His speed is such that centuries-old aelven blademasters seem like stumbling orruks in his presence, bleeding bit by bit by quicksilver strikes until fully dismembered into cruel, tiny pieces.[4b] Sigvald gives off an ethereal air of dark majesty, filling those who gaze upon him with the desire to throw themselves at his feet in praise, or toxically transfixed upon his gleaming armour until hypnotically choked to death.[4b] It is said that if one gazes upon a mirror and sees a twisted mockery of their self-reflection, then the Favoured Prince is lurking nearby.[4b]

Shardslash is the current rapier used by Sigvald. It has forged by the daemon-artisan Gyll'Falai using a fragment of the Magnificient Mirror, Sigvald's former prison, and six locks of golden hair containing a measure of his own soul. It mirrored its lost weapon Sliverslash, which can cut like Sigmarite and arcane wards like they were thin silk. It can also steal the souls of those it wounds so the Daemon Prince can torment them at his leisure.[3a][4b]

The Mirror Shield is an artefact from the World-That-Was, both alluring and indestructible. It is impossible to damage and in the hands of Sigvald it is the pinnacle of defence.[3a]

Sigvald's original rapier from the World-That-Was is Sliverslash, created from a silver of Slaanesh's own blade. Moving like quicksilver, it strikes down its foes in a flurry of lightning-quick blows. It has now gained the ability to steal away a soul with the lightest of scratches.[4b]