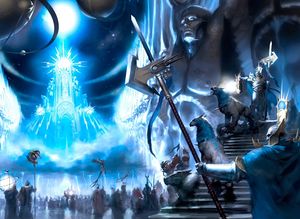 The Palace city of Sigmaron

Sigmaron is a vast palace-city of ivory towers and golden aetherdomes, which has grown on the upper slopes of Mount Celestian. Ramparts and walkways spill across the crags, an unbroken ring of sigmarite and celestine connecting distant mountain peaks – which themselves are given over almost entirely to forges and workshops. [2a]

Great storms often vent their fury upon the aetherdomes and their energy is funnelled into the citadel’s forges whilst the rain is siphoned into the many gardens and groves scattered throughout the city. [2a]

Visitors include representatives from Azyrheim and the other great cities of the Realm of Azyr, including Starhold and Skydock. [2a]

It is home to thousands of mortals - many work in the vaults and gardens, while others are scribes or messengers, an honoured few are granted the honour of serving in the inner chambers of the palace, where Sigmar himself holds court. [2a]