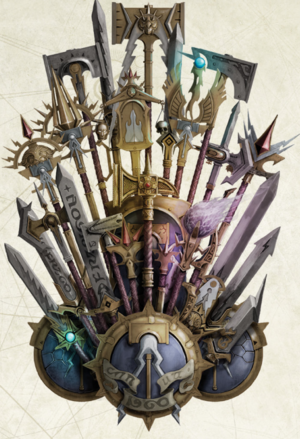 Sigmarite is an arcane metal that is mined from Mallus, the metallic core of the World-That-Was. This metal is employed by Sigmar, the Six Smiths, and Grungni, using the heavens as their forge, in the creation of the armor and weapons of the Stormcast Eternals.[1][2][4a]

Sigmarite Ore is excavated from Mallus by lightning powered automatons created by Grungni, God of Forges.[5a]

Every Sigmarite weapon forged for the Stormhosts is stronger than steel and forged within the Living Tempests of Azyr, which imbues the weapons with the celestial energy of the storm they were made in.[7a][7b]

Much like the Stormcast that wear it, Sigmarite can transmute into lightning. This allowed the warriors of the Stormhost to be rapidly deployed during the Realmgate Wars.[4a]

The Warding Lanterns of Lord-Castellants can heal wounds in damaged sigmarite, even restoring sections of armor that have been shattered and sundered.[4b]

Objects made from sigmarite are: