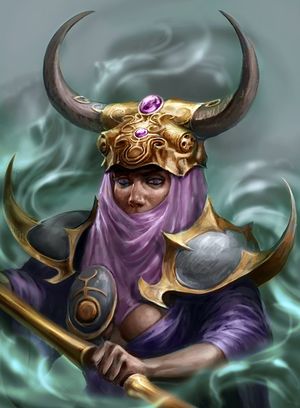 Shardspeakers of Slaanesh are sorcerers of the Hedonites of Slaanesh who have been gifted with a relic from the Temple of Twisted Mirrors. [1a][1b]

Slaanesh has been fascinated by mirrors and the Temple of Twisted Mirrors, located deep within the inner circle of Slaanesh’s domain, is a serpentine labyrinth that rivals even Tzeentch’s realm in complexity. Here are endless arrays of mirrors that can reveal the hidden aspects of a soul. When the Temple of Twisted Mirrors was defiled by a legion of Khornate daemons Slaanesh was enraged but quickly adapting the Dark Prince ensnared the perfumed djinns that roamed the Circles of Seduction and ordered them to deliver a single shard of the broken mirrors to a worthy mortal sorcerer. Those that were chosen became the first Shardspeakers and as they stared deeper into the depths of the reflective fragments, so did the rapacious eyes of Slaanesh stared back deeper into their souls.[1a]

Shardspeakers serve a role similar to that of soothsayer among the Sybarite carnivals, using their hypnotic eyes can stare into the souls of followers of Slaanesh to reveal hidden lusts. In combat they use their magics of pleasure and pain against their enemies.[1a]

Shardspeakers are armed with a Haze Staff and shadow-cloaked claws and with their dark invocations a Shardspeaker can tease a man’s nervous tissue out of his body like thread or compel them to offer up their own gorily extracted organs to Slaanesh. They are also accompanied by scented mist-daemons that can be commanded with a delicate gesture from the sorcerer, shielding them from harm or smothering enemies who come too close. [1a][1b]

The fragments of mirror gifted unto them still contains the power to enrapture the minds of mortals and a Shardspeaker can focus this magic, picking out individual warriors to disrupt an enemy battleline by bombarding them with visions of resplendent glory or divine mania combined with the whispered entreaties of the Slaaneshi sorcerers that can only be resisted by the strongest wills. Their victims will find their most debased aspects reflected back at them and is overcome by the urge to indulge their worst excesses, while the virtuous side of their psyche is spirited away to the Temple of Twisted Mirrors, forced to watch powerless as their destructive compulsions are unleashed against their comrades.[1a]