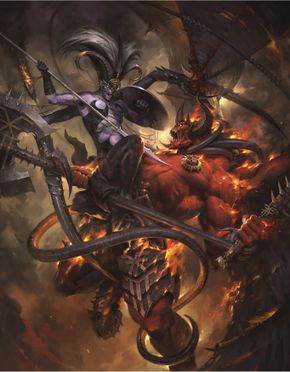 Shalaxi Helbane, also known as the Monarch of the Hunt, is a powerful Keeper of Secrets of Slaanesh, and Slaanesh's weapon against other Daemons of the other Chaos Gods. Through Shalaxi's blended senses and skill set of any Keeper of Secrets, Helbane has slain thousands of rivals of the Dark Prince and more.[2]

Should an enemy warlord raise the ire of the Dark Prince, a mental impulse will burst in Shalaxi's soul, driving Helbane to an all-consuming quest from which Helbane will never retire until complete. Shalaxi's sensorium, exaggerated by the strange antennae rising atop the greater daemon's head like a crown, allows it to perceive senses in different manners. This includes being able to see fear as a misting cloud, detect the scent of a spell before it is cast, hear the shearing sound of a mortal's life-thread being cut away, or taste cowardice as if it were bitter citrus. With the greater daemon's senses working in tandem, Helbane can see a prey's trail hanging as a swirling line in the air, even allowing it to peer through a Realmgate, across the Aetheric Void, and out of the other side, making this great daemon all but inescapable. The only possible safe haven is perhaps the abyssal regions of the Deep Places where little to no stimuli can thrive, where the Idoneth Deepkin make their home.[1a]

Shalaxi has ensnared and slain warrior kings, dragons, greater daemons, and hulking tyrants of destruction. Shalaxi's followers will often struggle to keep their leader's pace as a hunt draws to a conclusion. Other times, Shalaxi will be accompanied by a pack of Fiends, the beats trilling with joyous abandon as they race towards prey with their alpha. At the end of a hunt, Helbane does not attack by stealth, but rather openly challenges its prey with such subtle words that the challenge cannot be refused. Shalaxi's Hedonite followers live in hope of witnessing the grand kills that follow these challenges. It is whispered that one day, Shalaxi shall pierce the heart of a godbeast and prove the supremacy of Chaos over the realms.[1a]

Every aspect of Shalxi Helbane's fighting style has been devised to perfectly counter the fiercest prey and rivals of Slaanesh. In many ways, Shalaxi owes its existence to Slaanesh's desire to outperform Khorne in matters of martial prowess, by having the Dark Prince's own hunter defeat Bloodthirsters in single combat. Shalaxi's hallmark longspear, a weapon spoken of in obscene songs and verses amongst the Hedonites, allows it dart past a Bloodthirster's greataxe to impale its heart. However, even the most skillful combatants would find it nigh impossible to overcome a Bloodthirster in close combat, which is why Shalaxi wields a living whip that cracks out to wind like a serpent around the weapons of an enemy. This is accompanied by the hunter's own gown of pseudopod limbs that grasp, snatch, and throttle like tentacles of an octopus.[1a]

Shalaxi has learned the fighting styles of rival greater daemons from long experience. Helbane has impaled Lords of Change before they can finish their incantations, pierced the bleeding hearts within the blubbery chests of Great Unclean Ones, and outfought airborne Bloodthirsters even as they hurtled through the sky. Shalaxi has long held the desire to defeat Skarbrand, a Bloodthirster so powerful it once sought to defeat Khorne, and has dueled him to a draw twice. The great, eventual showdown between the two greater daemons will be one that will draw the attention of both Slaanesh and Khorne.[1a]