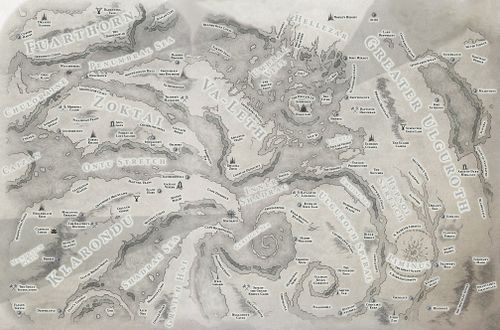 A map of the region known as Shadrac Convergence.

The Shardrac Convergence is one of the most important regions in the Realm of Ulgu. Situated at the meeting point of many of Ulgu's Thirteen Dominions, Shadrac is a nexus of trade and politics.[2a]

Yet, at its center sits one of the most shrouded and gloomiest regions of all of Ulgu, the Umbral Veil, and a well of shadow magic known as the Helleflux.[2a]

The ever-shrouded seas of the Shadrac Convergence are notoriously hard to navigate. Very few have managed to steer their ship across the dark waves without magical help, or falling prey to the many malicious entities lurking in the wilds of these lands. [2a]

The Realm of Shadow demands adaptability, and a certain outlook from all those seeking to make their home in these lands. Subterfuge, misdirection and opportunism are valuable traits in Misthåvn, and the other Ulguan settlements. While these conditions make these lands look unwelcome for many Duardin and factions like the Phoenix Temple, opportunistic Humans and insular communities like the Darkling Covens or Shadowblades have come to thrive in these lands.[2a]

Maybe none more than the Daughters of Khaine. Hagg Nar, the first temple city, and heart of the Khainite Cult has grown from a small shrine on the Helleflux Islands to a militarized center of Morathi's empire. Massive temples and gladiatorial arenas can be found across the Convergence, from Klarondu to Fuarthorn.[2a]

From its current location on the innermost tip of Klarondu, the city of Misthåvn dominates the sea trade in the inner convergence.[2a] Every form of illicit or contraband goods takes place in the city, narcotics, dark illusory magic and even stolen Chaos weapons, are said to trade hands.[2a] Hagg Nar is a major trade partner despite tensions with Khainites and goods traded include shadow-woven silks, illusory charms and prisoners for Khainite sacrifices. [2a]

One of the biggest exports are the strange and diverse Misthåvn Narcotics which first gained ground in the shadowy markets of Misthåvn. But over the years the drugs have swiftly spread to the black markets of many other Free Cities, and from these centers of trade they spread far and wide, to the point they, and drugs much like them, can be found in most major cities of the Mortal Realms.[4a] Scourge Privateers hunt down beasts with magical properties that dwell in the shadow-sea such as the abyssal glatch and the frenzied sawfang. Their corpses are then processed and broken down to produce magical narcotics that can give magical powers when consumed. While this narcotics industry is illegal the Conclave ignores them due to its importance to the city's economy.[2a] 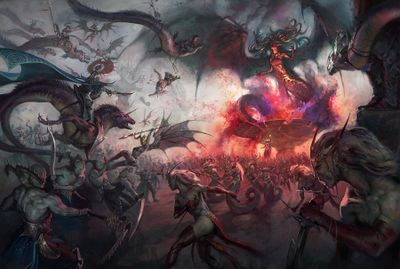 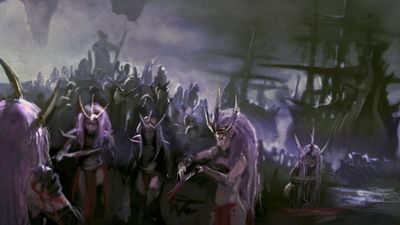 Fleets from Hagg Nar and Misthåvn raiding the coasts of Klarondu 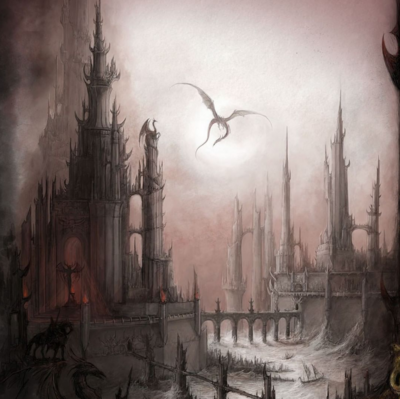 Capital of the Daughters of Khaine, Hagg Nar