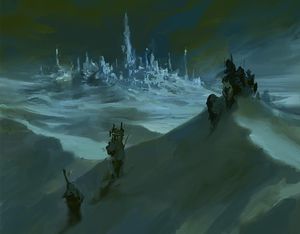 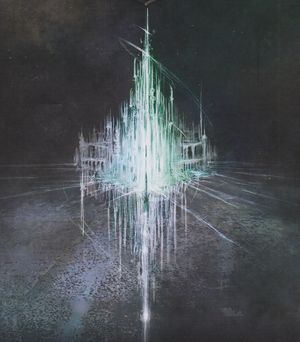 The City of Shadespire.

Shadespire also known as the Mirrored City or the City of Mirrors was a grand city founded in the Age of Myth as a waypoint for travellers crossing the Desert of Bones in the Realm of Shyish. After its banishment it gained the name city-between-realms[1a][10]

Explorers and travellers in the Desert of Bones discovered a series of deep canyons that cut deep beneath the crushed bone sediment of the dunes, this they named the Oasis of Souls. It descended far beyond where anyone would risk their lives to explore but the energies of the realm itself seemed to converge there. Despite or perhaps because of this, shelter, water and life could be found there and soon a shanty town arose both in the caverns and above ground and eventually became a town and then a city.[1a]

During the Age of Myth the city was a mercantile metropolis with many different races living and working within the safety of its walls and as time passed it became known for creating artefacts of power and beauty. Perhaps the most famous of these treasures was refined shadeglass, a substance from within the Oasis of Souls that the ruling Katophranes used to live on after death, preserving their essence within the glass itself.[1a][2]

Duardin were employed to provide the city with a variety of mechanisms and devices - including rune-hatches, what appears to be a mere burn mark being actually a concealed door. [4e]

The Faneway was the pinnacle of shadeglass technology, a nexus the Katophranes created to link all the shadeglass in the city allowing those within the glass to communicate with each other and living inhabitants. The walls of the city itself were guarded by the spirits of ancient warriors and shadeglass golems allowed loyal retainers to continue service after death.[2]

Yet Nagash the Great Necromancer discovered that the rulers of Shadespire were depriving him of what he considered his rightful tithe of souls and he resolved to punish them for their insolence and defiance. He could have simply laid waste to the city and all within it but Nagash is a master of cold vengeance and so he enacted a terrible fate on it and all its inhabitants. Using the power of the shadeglass itself, Nagash enacted a mighty ritual, shattering the Faneway and banishing the city to the void between the Realm of Ulgu and the Realm of Hysh.[2]

The inhabitants had sought to escape death and so he cursed them that they would forever remain trapped within the refracted mirrored city now an ever changing labyrinth of illusion and madness - a terrible monument to show what happened to those that would defy the Lord of Death.[2]

The ruins of the city still exist in the Realm of Shyish and those who enter them may find themselves also trapped in the shadow city that is stuck between realms but brave and foolhardy adventurers still seek out the city. It is thought that the only way to free both inhabitants and new arrivals is to rebuild the shattered Faneway and so many seek the shards of that broken artefact. [2]

Nothing can truely die in the city, not even the Stormcast Eternals, [4a] and those stuck within have no need to eat or drink, although many still do so. Katophranes still gather groups of people together, mostly newcomers who still have hope - these they bid gather shadespire to rebuild arcane devicecs or merely to trade with others of their kind. [4f] 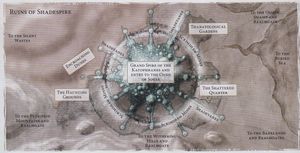 The Ruins of Shadespire in the Realm of Shyish

Many of the inhabitants have gone insane over the intervening thousands of years, their decaying bodies animated but still decaying, their souls trapped within. Some turned to desperate worship of Nagash, hoping that he might have pity and at least end their torment. Great rotting sepulchres of the tormented and undying celebrate their newfound devotion to the Great Necromancer.[2]

Newcomers still arrive, some are refuges from the wars that rage through the Mortal Realms, others determined to loot the fabled city for their own purposes. Some simply look to explore, some like the Fyreslayers of the Vostarg lodge look to repay their ancient pledge to defend the city – hoping to release all within from their torment.[2]

The original inhabitants, other than those Katophranes trapped within the shadeglass continue to decay until they are nothing but skeletons at which point they join the ranks of those who serve the Sepulchral Warden. [4b]

The air is cold, stale and still and seems to tremble as does the myriad of mirrors that are strung beneath archways and in wall niches. Dust clings everywhere, spilling down and drifting up across the armies of statuary, many of which hold more mirrors. [4a] Ilesha Dune compiled five hundred and thirty seven maps of the city, none of which matched, some merely had one or two streets different, others were radically different. [4g]

Nature of the city

Ilesha theorises that the city is connected to all Realms and throughout time but has begun to change and evolve, so much that even Nagash is unsure of what it might become, . [4g]

There is neither day or night, simply an eternal twilight. [4g]

Above and around the city swim massive creatures of the void. [4g]