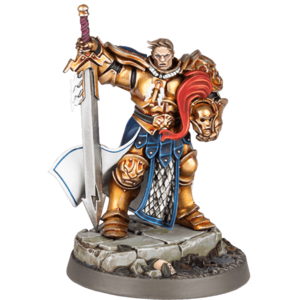 Severin Steelheart is a Liberator-Prime that leads the Steelheart's Champions warband stuck in the Shadespire. He is a charismatic, a respected leader and a veteran of countless battles whose warriors would follow to the gates of the Brass Citadel itself.[1][2]

During his time in the Mirrored City, Severin Steelheart briefly worked for Sadila Hausa, not unlike many other of adventurers, warriors and travelers who had stumbled into the city, a Katophrane whoclaimed that recreating the Faneway would allow all to escape.[4]