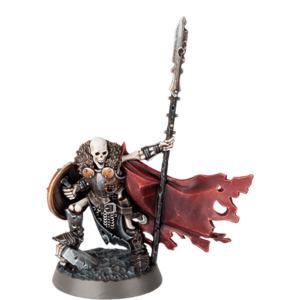 Sepulchral Warden was once the Lord Marshal of Shadespire, but in undeath he leads Sepulchral Guard to defend the city. He has been gifted with strange necromantic powers by Nagash, causing his followers to be inspired with frenzied devotion. He is the greatest amongst the faithful that petition the Great Necromancer for freedom, and will slay all who would challenge the will of the God of Death.[1]

According to Shadespire: the Last Days by Palento Herst, he had called upon the other Katophranes to make peace with the Undying King but was instead crucified at the highest point of the South Wall of the City. [3a]