From Age of Sigmar - Lexicanum
(Redirected from Sepskrik the Foul)
Jump to: navigation, search 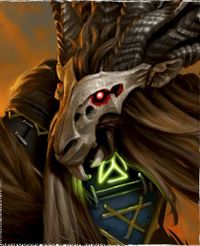 Infamous for inflicting some of the most deadly plagues upon the Mortal Realms and known as the Foul due to the living carpet of parasites that infest is fur. Ironically, despite the disgusting trails of destruction and corruption he leaves on all he touches, he requires that all his plague ingredients are kept in the correct state - hagwolf teeth must be polished and Troggoth warts must be shrivelled to exactly the right size. [1a]

It was he who introduced the Crimsonweal Curse to the fountains of the Glittering City and inflicted the Grey Shrivelling on the Everwoods of High Sephardia.[1a]

In the Realm of Ghyran he had spent much time whispering to Skroglitch Twistspine who commanded one of the seven great bastions that defended the Genesis Gate. He told him that one of the other commanders, a sorcerer, had perfected the Oozing Eye incantation, a step towards creating a Grindwyrm which was a key ingredient in creating a Great Plague. As the forces of Alarielle and Sigmar advanced on the Realmgate, he and Skroglitch saw the perfect opportunity to capture the sorcerer. [2a]