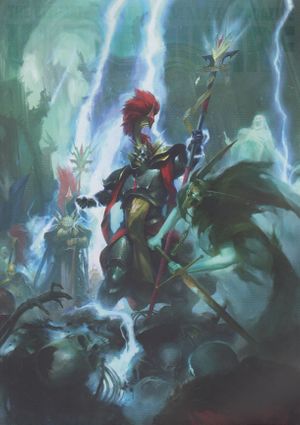 All of the Stormcast of the Chamber were once sorcerers, Wizards or other beings of magical power. As well as a powerful force on the battlefield, they also attend upon the Anvil of Apotheosis in Sigmaron and are part of the secret search to solve the ongoing issues with the reforging process. [1a]

Secretly, members of the Sempiternals are sent out into the Mortal Realms, concealing their true nature and their powers as much as possible, even ensuring that the Freeguild they save from the Black Cerement drink the water of Lake Lethis and forget that which they saw. [1a]

The Chamber are charged with defending the Midnight Tomb in the city of Lethis. [1a]

When Glymmsforge is attacked in the wake of the Necroquake, they join their brethren and those of the Hammers of Sigmar in defending the city from the Nighthaunts of Malendrek. Following that partial victory, brotherhoods of the chamber fight increasingly desperately against the growing power of the armies of Death and Chaos, even though on occasion they themselves draw upon and unleash too much power. [1a]

Nagash, now aware of the Midnight Tomb, tasks his Mortarch of Grief with breaking the walls of the Lethis and breaching the tomb to release what dwells within. The city defences were created with consummate skill by Clavos Arthreus and they are now aided by the Grave Brethren, Freeguild regiments, Duardin from Barak-Nar and the Greyfyrd Lodge, Deepkin from the Ionrach enclave and even the Flesh-Eater Court of King Maldoros. [1a]

However the Nighthaunts are unrelenting and seemingly without number, forcing the abandonment of the outer defences and when the Greyfyrd fyreslayers betray them due to unpaid debts, the city and the tomb fall. The Stormcast return to Azyr to be reforged and many pledge revenge and restitution.

The Resurrection Crusade begins as Sigmar unleashes the Sacrosanct Chambers against the undead but they must also face resurgent Chaos warlords such as the Great Pretender, whilst aid is called for by King Ecravir of the Idoneth Deepkin.