From Age of Sigmar - Lexicanum
(Redirected from Scorched Keep)
Jump to: navigation, search 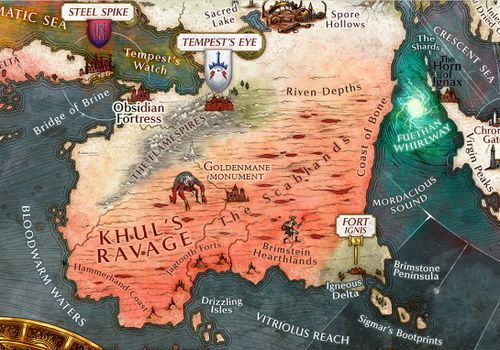 Khul's Ravage, Where the Brimstone Peninsula, is located, is a region of the Great Parch continent in the Realm of Aqshy. It borders with the Vitriol Sea on the east and the Ocean of Swords on the west. It's lands borders with the Flamescar Plateau and Vitrolia to the north.[4a]. The battle for this peninsula was the first battle in the Realmgate Wars and it heralded the Age of Sigmar, where the Stormcast Eternals first arrived in the Mortal Realms to wage war against the forces of Chaos.[1][2]

Some of the known locations on this landmass are:

Of the coast the following isles can be found: